Article and photos by Zoë Poulsen

Spring has well and truly sprung in the Cape Floristic Region. After the winter rains the fynbos has come to life, alive with a diversity of stunning blooms and full of busy pollinators. Some of the most spectacular of these are known as the ‘Pincushions’ with such strange looking flowers that one might be forgiven for thinking they have come from outer space. 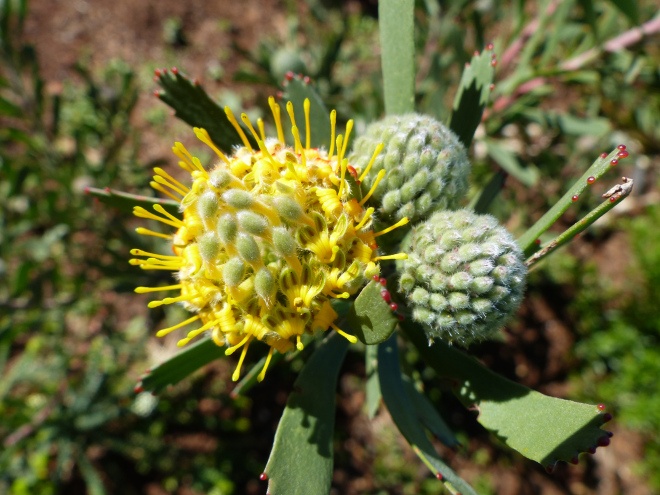 These are the Leucospermums, which are part of the Proteaceae, one of the three key families that typify South Africa’s famous fynbos vegetation. The blooms of Leucospermums are recognised by their unusually long, stout and colourful styles that are the ‘pins’ of the pincushion. Unlike their other Proteaceae relatives, Leucospermums have small inconspicuous bracts around the flowerheads and tooth shaped margins at the end of the leaves. 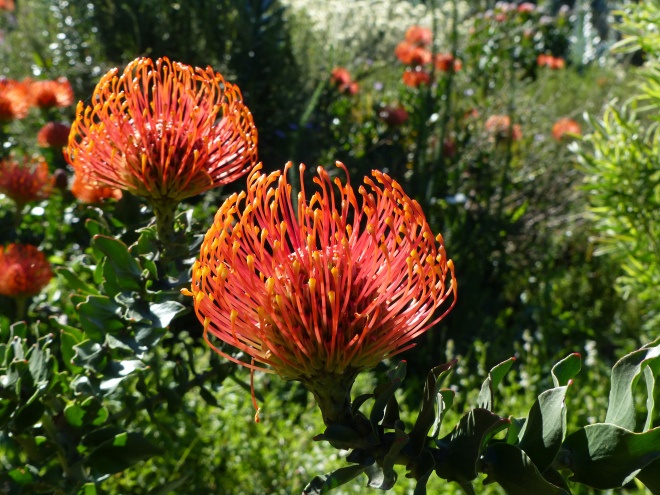 Members of the genus range in size from huge shrubs to low growing prostrate species that grow along the ground. The larger more upright species are pollinated by sugarbirds and sunbirds whereas the more prostrate ones are pollinated by rodents. After seeds are set they are often predated by rodents. Those that survive are collected by ants, attracted to a fleshy appendage on the seed. The ants carry the seed underground where they are safe from predation. There they will stay until the next fire moves through the fynbos, allowing the seeds to germinate and the next generation of Leucospermums to grow. 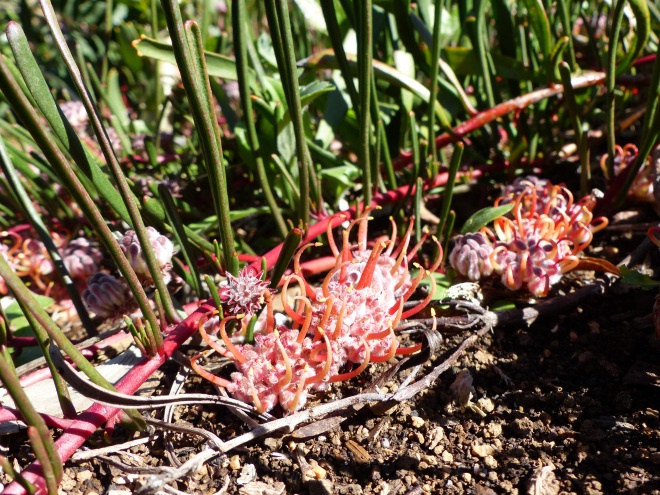 The genus Leucospermum has a total of 48 species, the majority of which are found only in the Cape Floristic Region. There are however two species (L. rodentumand  L. praemorsum) with a range extending north into Namaqualand, two species (L. gerrardii and L. innovans) in Kwa-Zulu Natal and one (L. saxosum) in Mpumalanga northwards into Zimbabwe. The most important centre of diversity for the Leucospermum genus is the Agulhas Plain, where there are a total of 30 species occurring. 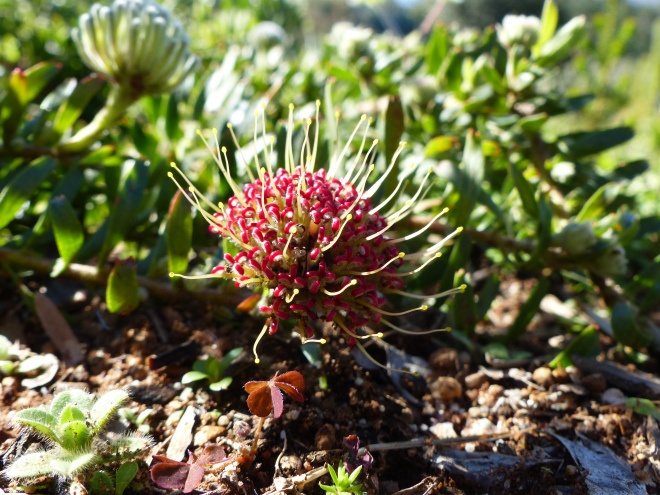 The plant collections at Kirstenbosch National Botanical Gardens showcase a rich diversity of different members of the genus, many of which are flowering now for visitors to enjoy. Perhaps the most well-known of these is Leucospermum cordifolium, with their large and spectacular orange blooms. This species is a popular and easily cultivated garden plant that is used in the cut flower industry all over the world. 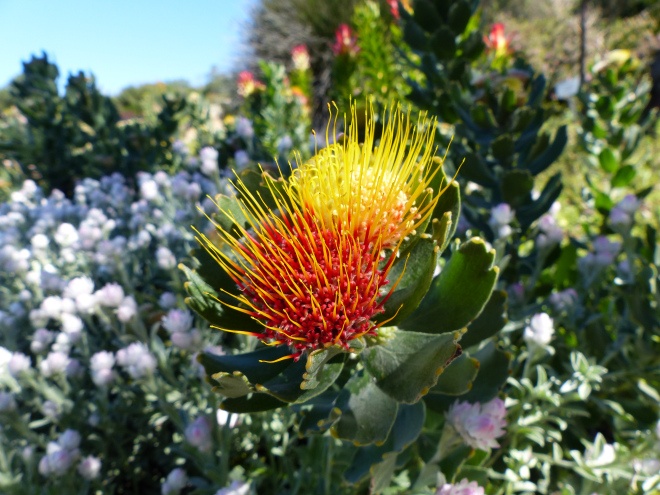 Leucospermum fulgens, easily recognised with its large fiery red and orange blooms, comes from limestone fynbos in the eastern Overberg. Sadly as a result of inappropriate fire management and loss of habitat to alien invasive plants, it is Critically Endangered in the wild. Kirstenbosch NBG provides this species and many others with a safe home should the worst happen to its wild population. 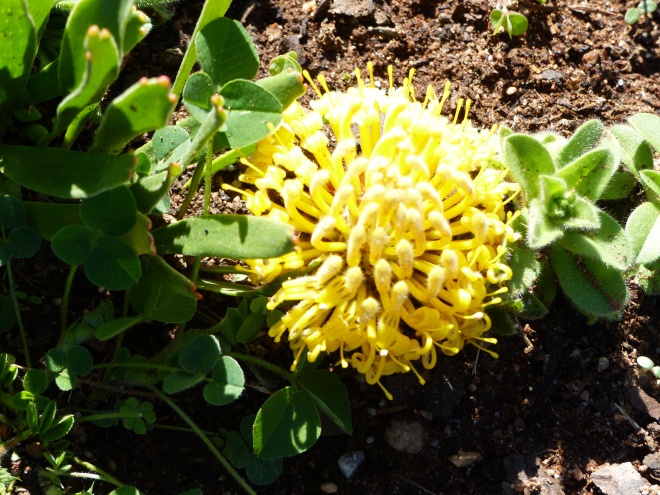 There are several members of the genus that have flowers that change colour almost like chameleons as the blooms age. Leucospermum oleifoliumflowerheads are initially yellow, turning a rich orange and then intense crimson red as the flowers age. Leucospermum heterophyllum has flowers that are lime green after they open, changing to a deep wine red over time. Often flowers of different colours are present on the same plant as the flowering season progresses. 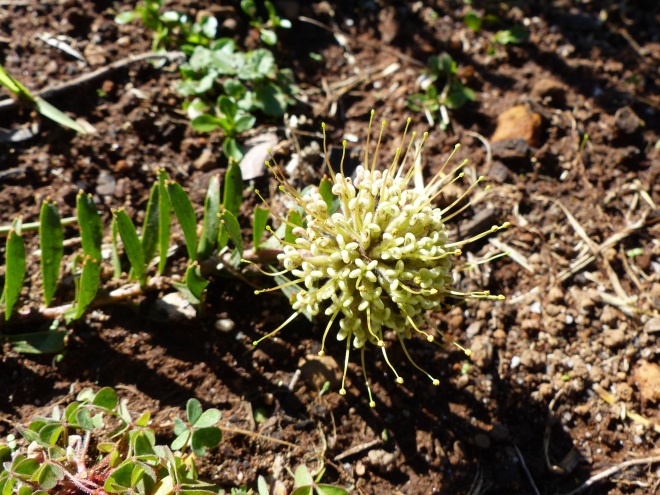 Why not come and visit Kirstenbosch and see for yourself? Entry to all South Africa’s National Botanical Gardens is free for BotSoc members. The Kirstenbosch Nursery also has a great selection of Leucospermums so garden waterwise and indigenous and consider giving a home to one of these beautiful plants.