​Through thicket and thin: Protecting this incredible biome

Above: Mesic Thicket along the Baakens River in Gqeberha with French Aloe (Aloe pluridens) emerging above the canopy. Photo by Adriaan Grobler.

South Africa’s thicket vegetation is characterised by a dense tangle of multistemmed and often prickly shrubs. Despite its initially unwelcoming appearance, it is in fact home to the highest diversity of different plant growth forms compared with the country’s other biomes.

Thicket comprises evergreen and deciduous trees, a rich succulent diversity from towering Euphorbias to creeping vygies, shrubs, vines, bulbs and grasses. Historically, thickets have received little attention from scientists in comparison with other biomes such as the fynbos, but this is changing. 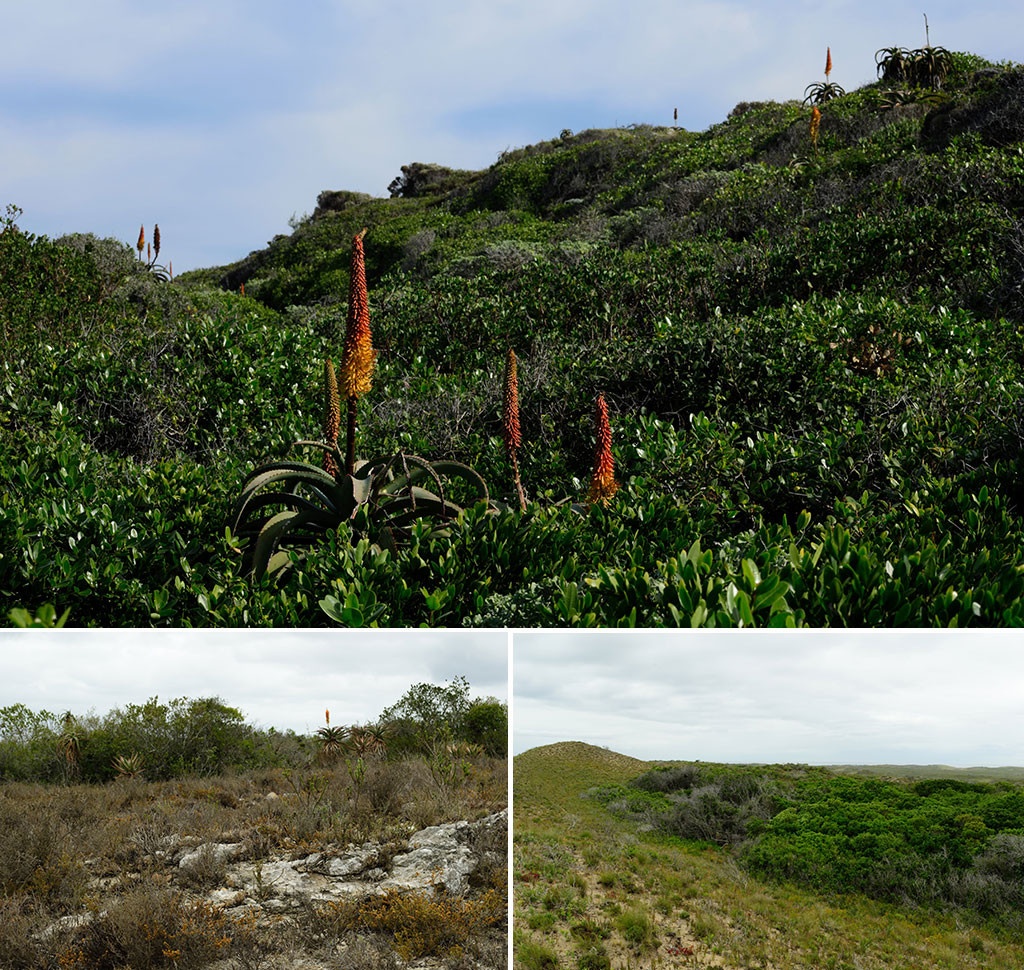 Where is thicket found?

Thicket is found in semi-arid areas of the Western Cape and the Eastern Cape. It forms part of the thicket biome and is present as a key vegetation type in three different biodiversity hotspots in South Africa, namely the Maputaland-Pondoland-Albany, Succulent Karoo and Cape Floristic Region.

It is distributed in South Africa from the Gouritz River eastwards to the Kei River, with the largest areas of thicket being found in the Gamtoos, Sundays and Fish River valleys. 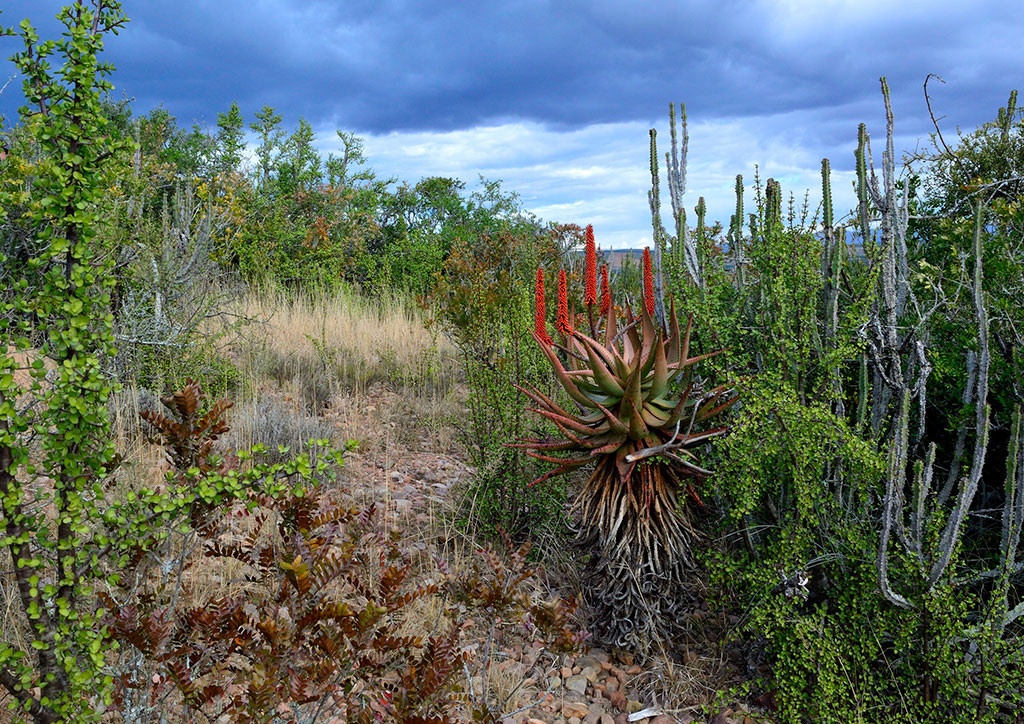 Above: Succulent-rich Valley Thicket on shallow soils of the Zuurberg Mountains near Kirkwood. Photo by Adriaan Grobler.

There are estimated to be around more than 1 500 plant species that are found in thicket, of which about 20% are endemic to this extraordinary vegetation and found nowhere else on earth. Thicket is also home to the second largest succulent flora in the world, with 344 species and an extraordinary level of endemism of 50%.

It comprises a total of 206 species across 66 genera. But thicket vegetation is highly understudied and it’s likely that there are in fact more species waiting to be discovered. Either way, the proportion of bulbs in the total thicket flora is one of the highest in the world, only short of the fynbos biome and Namaqualand in the Succulent Karoo.

Thicket is also home to many different animals and birds, as well as a substantial reptile fauna including four tortoise species and many endemic lizards. Large mammals play an important ecosystem engineering role, including elephants, black rhino and even buffalo, creating open spaces that allow other wildlife to move through the vegetation. 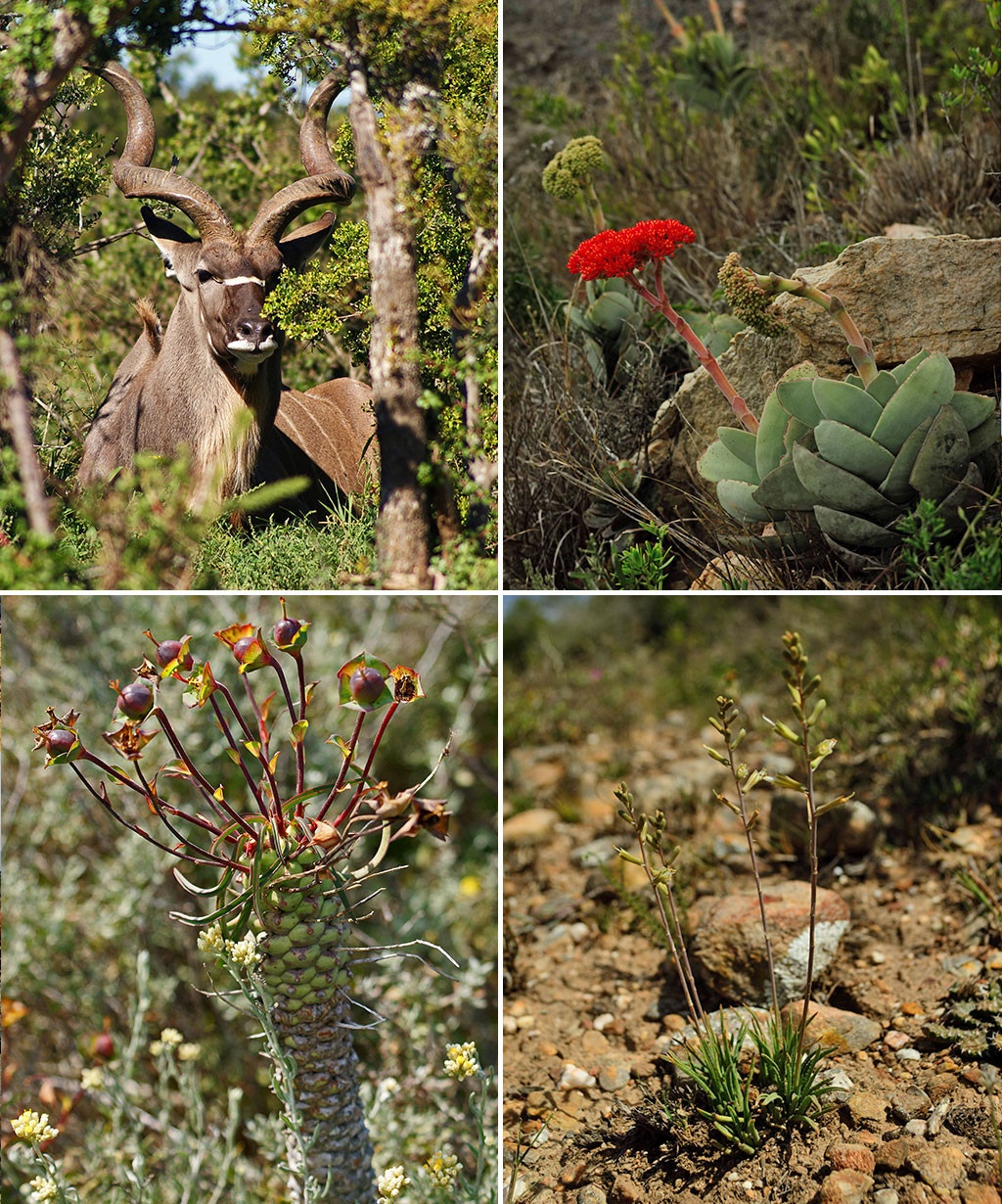 Formed by the climate

Subtropical thicket vegetation is found in areas that receive an average annual rainfall of 200–950 mm per year.

This rainfall is distributed throughout the year due to the convergence of two different climatic systems. The region to the southwest receives year-round rainfall, whereas the area to the northeast receives most of its rainfall during the summer months.

In the northeast of the thicket biome, as the climate moves toward summer rainfall, the vegetation gradually transitions to grassland and thorn tree savanna. As the climate changes to the southwest, there is a gradual transition to fynbos. 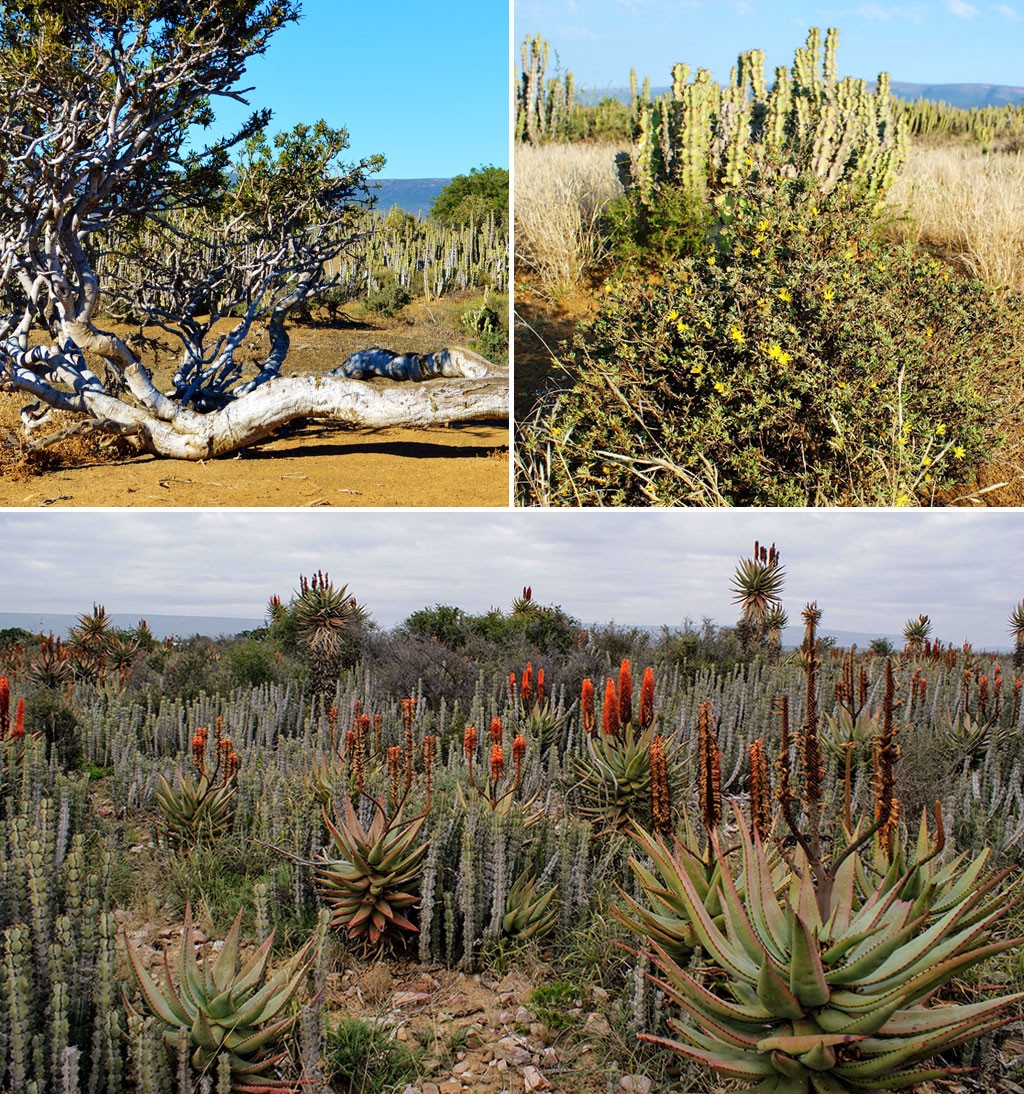 Geology and soils: A rich history

This geology is of biogeographical importance because it supports outliers of fynbos and renosterveld vegetation within the thicket biome. Most of these fine-scale variations in vegetation are because of the interaction between climate and soils, the latter of which are derived from the underlying geology. 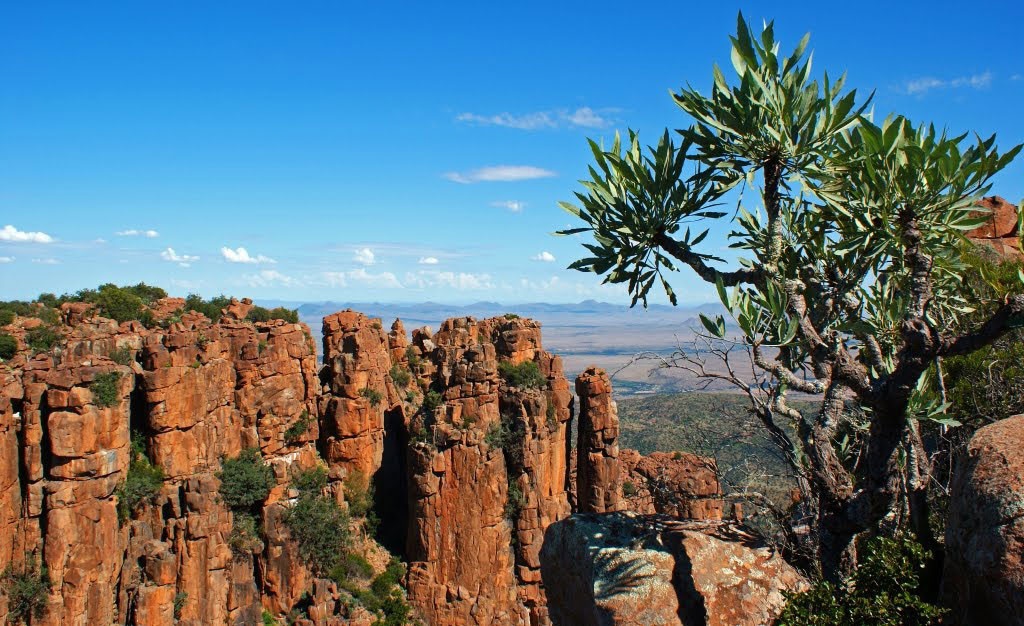 Origins of the thicket biome

Most lineages of the flora and associated insects of the thicket biome have their origins in the Eocene (56–33.9 million years BP), when the climate became much colder and drier. This timing is supported by evidence derived from fossil pollen.

Some taxa have their origins in the supercontinent of Gondwanaland, dating back more than 280 million years. This includes cycads in the genus Encephalartos, the cabbage tree Cussonia in the Araliaceae family, as well as the bird of paradise plants (Strelitzia).

Many of the trees that grow in thicket are tropical in affinity, with extensive distribution ranges extending northwards into the African subtropics and tropics. 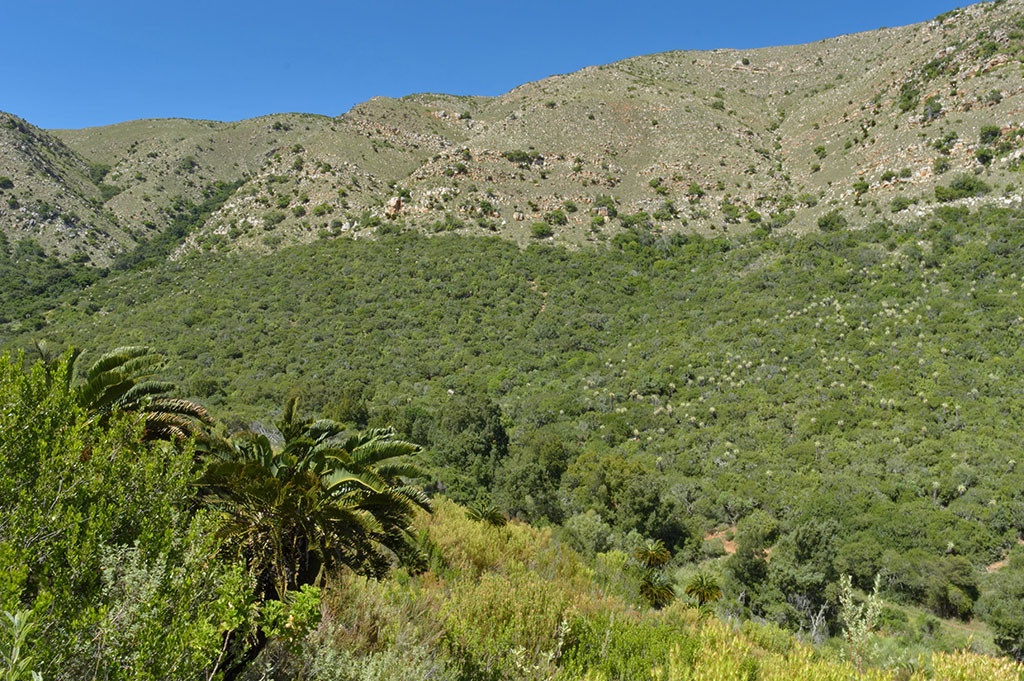 Above: Valley Thicket occurring in a single landscape with three other biomes – fynbos, forest and grassland – in the Zuurberg Mountains north of Kirkwood. Photo by Adriaan Grobler.

Like many of South Africa’s highly biodiverse ecosystems, thicket faces a range of different threats. In fact, around 70% of thicket has been transformed or removed. Threats include crop cultivation, livestock grazing and urban development.

Much of the thicket that remains intact and in good condition is conserved within national parks, including Addo National Park in the Eastern Cape. However, there is concern among conservationists regarding the thicket outside of the protected area estate, with more work needed to protect this biome.

At the same time, more research is needed to better understand thicket. Several of our BotSoc Algoa Branch members are now involved with thicket research, which will also assist in conserving the thicket biome.

The Botanical Society of South Africa is committed to the strategic conservation of South Africa’s extraordinary flora and biodiversity. Learn more about our work on our website and by following our social media channels. 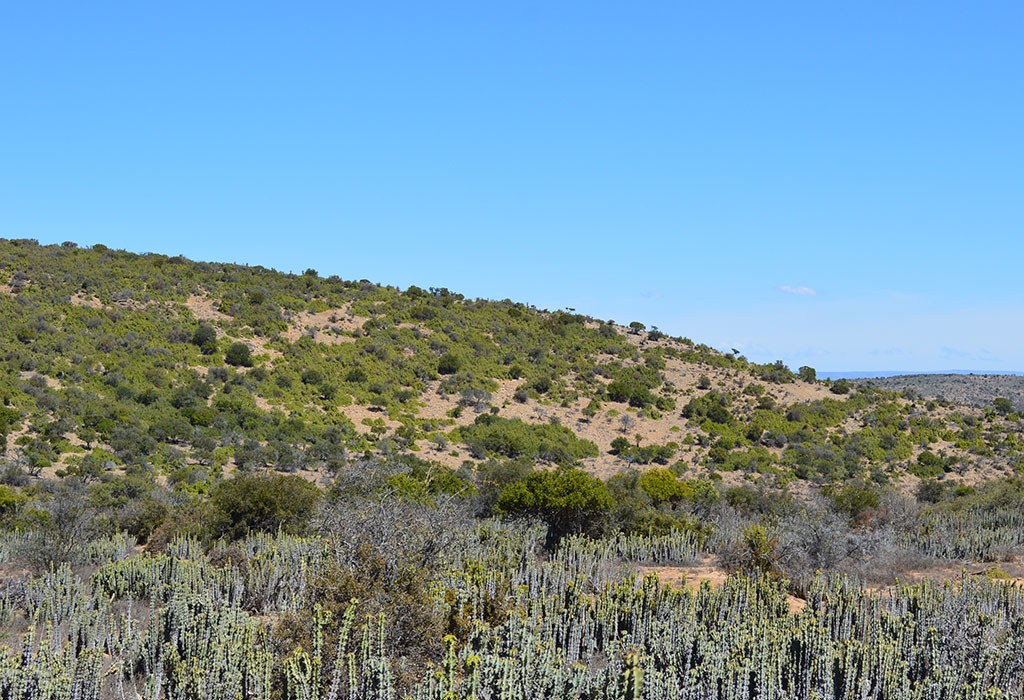 Our Living Libraries: Why are Botanical Gardens so important?
Today South Africa’s botanical gardens hold an extraordinary and diverse range of plant collections, representing South Africa’s megadiverse flora across all its ecosystems.
1 2 … 13 Next