Professor Neil Crouch was presented with the Marloth Medal in a light-hearted ceremony at the Durban Botanic Gardens on Monday, 22 October.  The presentation was convened to coincide with the visit to Durban of new national Council Chair of the Botanical Society, Mrs Marinda Nel.

The Marloth Medal is awarded to any person, professional or amateur botanist, who has produced significant literature of a popular nature to stimulate public interest in the indigenous flora of southern Africa.  The medal commemorates Dr Rudolph Marloth, pharmacist, analytical chemist and botanist who published much on the flora, his most famous contribution being the Flora of South Africa, which appeared in six magnificently illustrated volumes between 1913 and 1932. 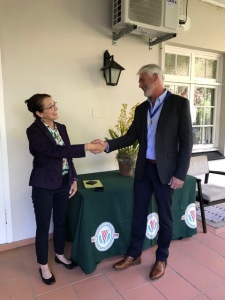 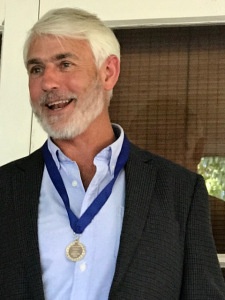 Prof. Crouch was nominated by Professors Gideon Smith and A. E. (Braam) van Wyk , for his work across a broad section of our flora, including ferns, succulents and medicinal plants.  Prof. Crouch has written or co-written ten books and over 330 papers, chapters or other publications. His research work has been matched by a great interest in field work. He has served as the Scientific Editor of PlantLife and is a Trustee of the Botanical Education Trust.

Prof Crouch graduated from UKZN : Pietermaritzburg in 1989 with a B.Sc. in Botany and Biochemistry. This was followed by a Ph.D in plant physiology also from UKZN. Whilst busy with his lab-based research, he explored his interest in field-based natural history, and wrote a field guide to the ferns of Ferncliffe Nature Reserve. Following his PhD, the National Biodiversity Institute (now the South African National Biodiversity Institute) employed him as their ethnobotanist. He continues to be based at KZN Herbarium on the Berea, now as Deputy-Director, Biodiversity Economy.  At the same time, he is an Honorary Professor in the School of Chemistry and Physics at UKZN. 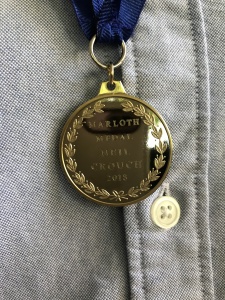 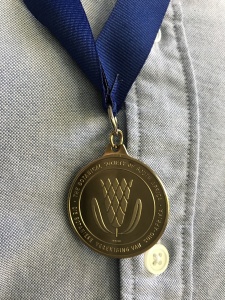 Top & Above: The Marloth Medal awarded to Neil Crouch.

Mrs Nel commended Neil on how his botanical skills had translated into books for the benefit of all.

On accepting the medal Prof. Crouch thanked BotSoc for considering him even though he was not a BotSoc member. He said that it was through interactions with other people that he had become excited about plants and had wanted to share the information with others. People like Geoff Nichols, Ian Garland and Elsa Pooley had passed on their passion to him. He had enjoyed collaborating with all his many co-authors, such as Gideon Smith, and John and Sandie Burrows. He acknowledged all those he had worked with and thanked them, remarking how even a small interaction can have a big impact.  He hoped to see others ‘picking up the torch’ in the future and speaking and writing on behalf of local plants and their environment.

Neil’s wife, Tanza, an entomologist and ceramic artist, and father-in-law, Dr. Richard Clark, were there to support him. Geoff Nichols and Richard Boon among other friends and associates created much merriment with their witty comments.