​​A rare habitat for rare plants: The Cape’s coastal dunes

Above: Near Stilbaai in the Cape floristic region,  the fynbos is dominant and largely made up of blombos (Metalasia muricata) and garlic buchu (Agathosma apiculata). The subtropical thicket is far sparser and mostly only stunted candlewood (Pterocelastrus tricuspidatus).

If you find yourself along the Cape coast, enjoying a day on our reopened beaches, take a moment to pause and admire some of the botanical treasures in the coastal dunes. 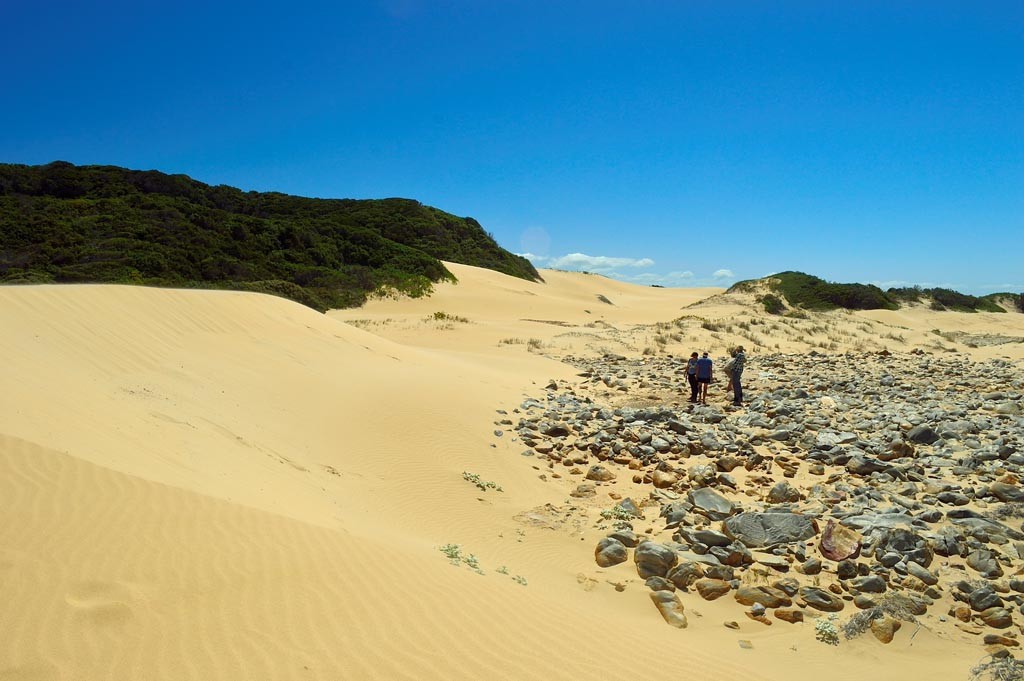 Above: At Cape St Francis in the Cape floristic region, the coastal dunes are typically harsh environments for people and plants alike.

They are very different from towering, sandy deserts such as the Namib or Sahara. Instead, the Cape coast’s dunes have a wider range of habitats than most of us expect, including:

Which of these two thicket types occurs depends on the conditions. Fynbos thickets dominate in drier, fire-exposed sites. Subtropical thickets prevail in moister, fire-protected spots. In areas where there is plenty of moisture and no fire for long periods, small pockets of coastal forest can develop in sheltered dune areas.

Coastal dunes can be particularly harsh environments. Throughout the year, they are exposed to blistering sun and strong, salt-laden winds that also carry highly abrasive sand grains. 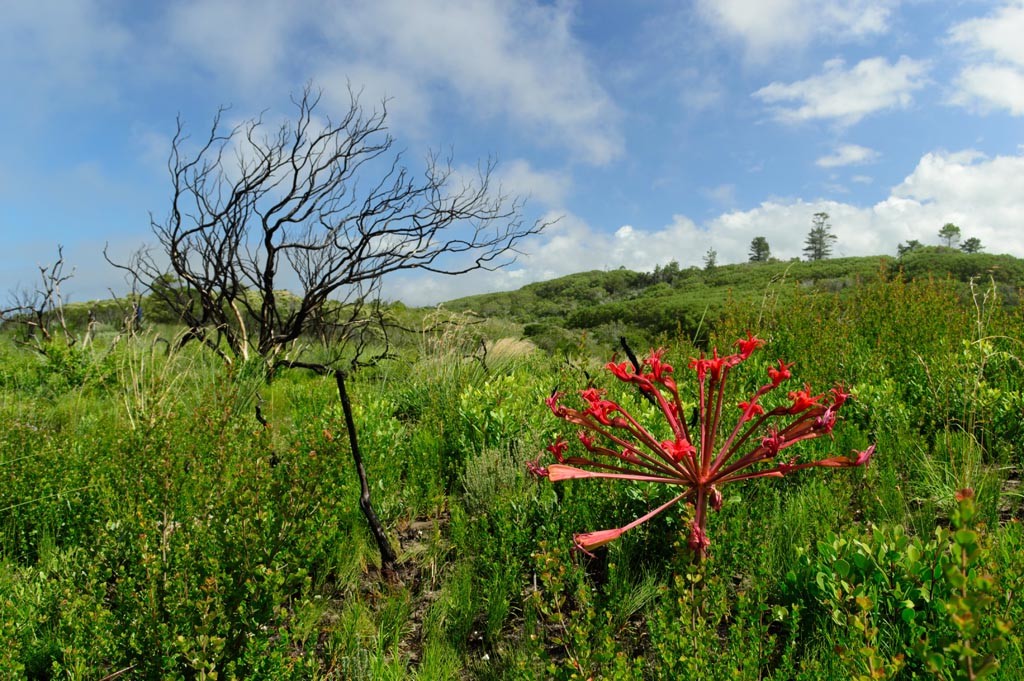 Above: This candelabra lily (Brunsvigia orientalis; Amaryllidaceae) is flowering in recently burnt dune fynbos at Goukamma Nature Reserve in the Cape floristic region.

Plants also have to cope with growing in dune sands that are highly alkaline, typically infertile and very poor at holding water. Remarkably, despite such an inhospitable environment, the Cape coastal dunes are rich in plant species – many of them found nowhere else in the world:

This makes about a third of all plant species found in dunes chalk-dwellers, or calcicoles, growing only in highly alkaline, chalky (calcareous) soils. 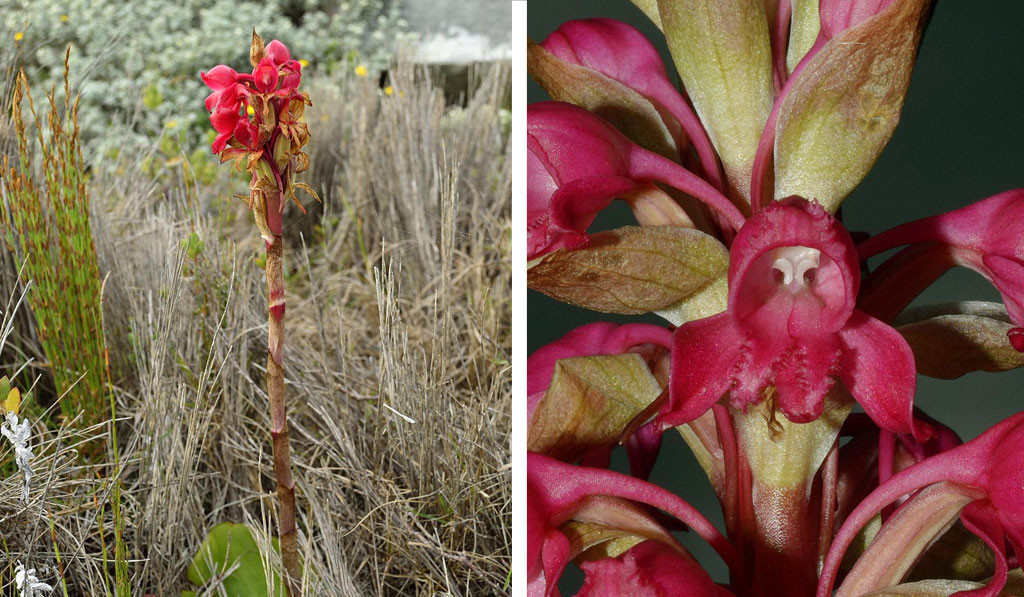 Above: Satyrium princeps is a threatened orchid species restricted to the Cape floristic region’s coastal dunes.

To understand why Cape dune plants are so remarkably rich in different, highly localised species, we must look back to the Pleistocene, from 2.58 million to as recently as 11,700 years ago. During this period, there were repeated ice ages (glaciations) and corresponding lower sea levels – so along the Cape coast, for instance, shorelines were much lower than they are today.

This exposed a vast, level landscape, the palaeo-Agulhas plain, off the south coast of what we now know as the Cape floristic region, and allowed large tracts of dune sand to accumulate. It provided a huge coastal dune habitat – orders of magnitude larger than we see today – where a rich dune flora could develop.

Coastal dune ecosystems are under threat throughout the world and, sadly, the case is no different in the Cape. Large areas of dune habitat have been transformed by urban and industrial development, especially around the metropolitan areas of Cape Town and Nelson Mandela Bay. 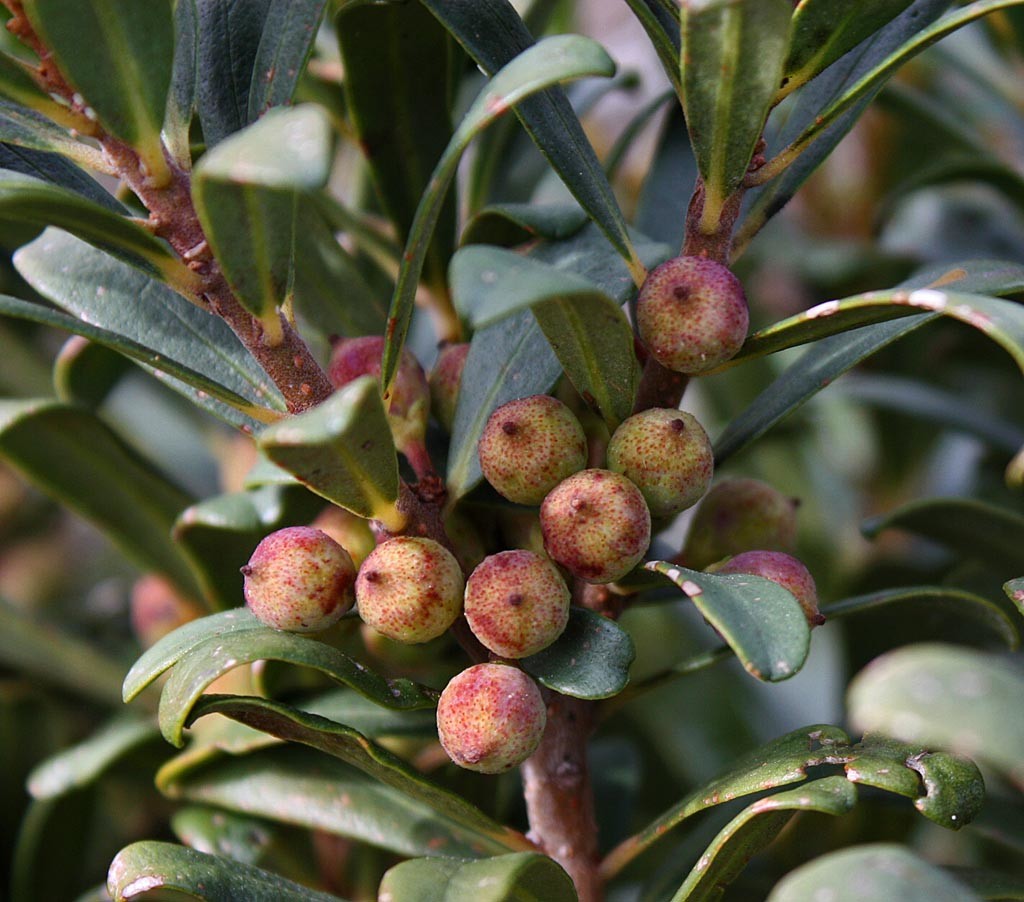 Above: The dwarf Cape beech (Rapanea gilliana; Myrsinaceae) is a threatened species restricted to dune thicket in the Cape floristic region.

Most dune plant species are naturally confined to small dune areas and combined with the impact of these widespread, transforming forces, this results in coastal dunes packed full of threatened indigenous plant species.

So on your next trip down to the beach, keep an eye out for some of these botanical rarities to help our Red List scientists better understand and protect some of South Africa’s most vulnerable plant species. 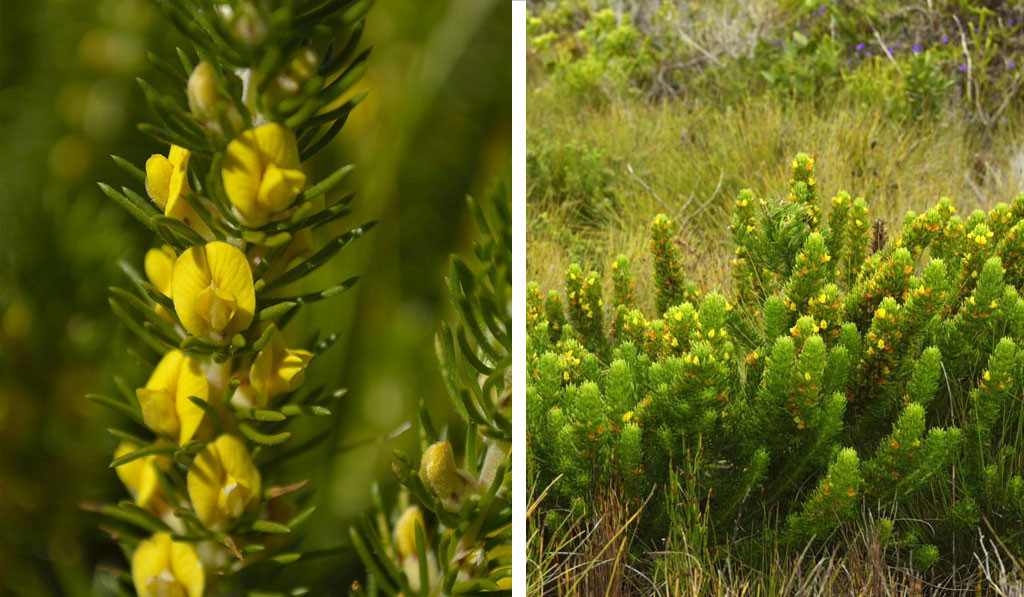 Left: Aspalathus cliffortiifolia. Right: Aspalathus recurvispina. Both Fabaceae are examples of very localised dune-endemic species that have suffered extensive habitat loss and are now both listed as critically endangered.

WHAT TO LOOK FOR IN DUNE FYNBOS 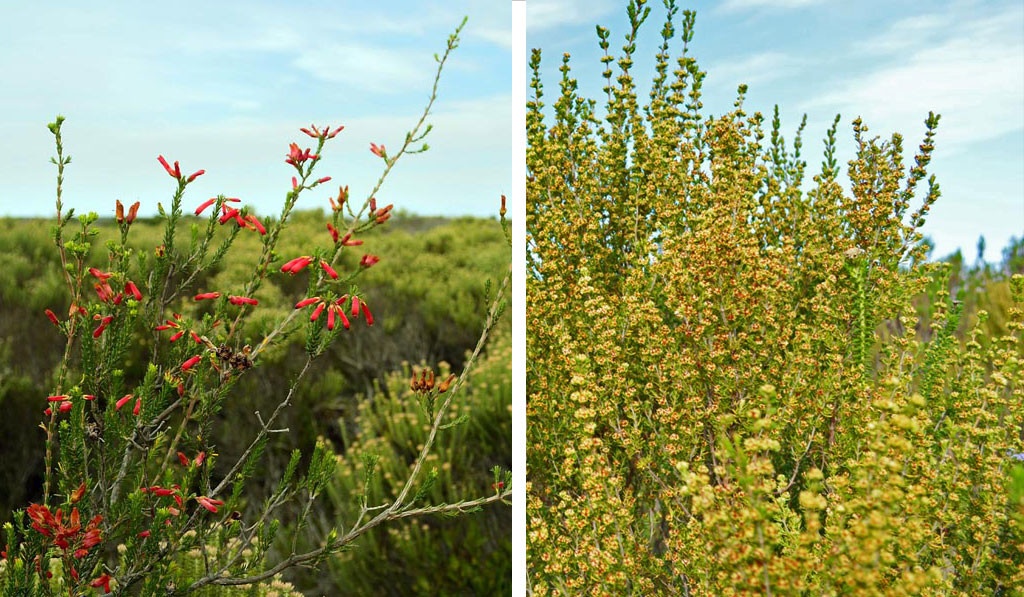 Left: Erica chloroloma. Right: Erica glumiflora. Both Ericaceae are threatened species found only in or near dune fynbos. 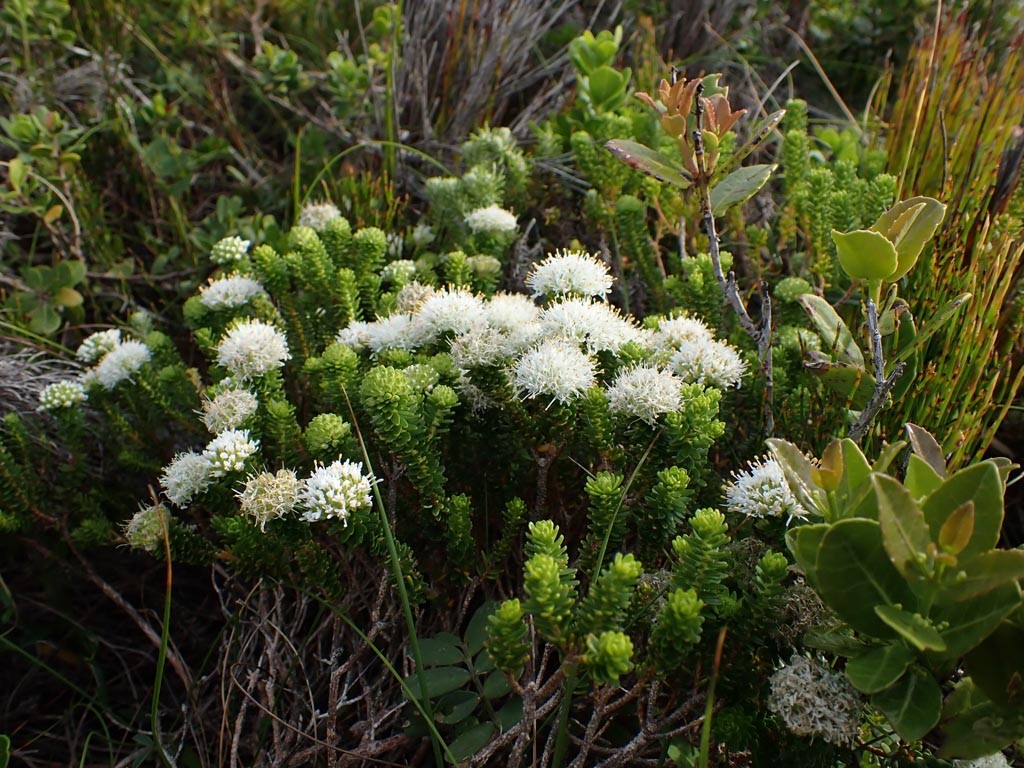 Above: A member of the buchu family (Rutaceae), Agathosma stenopetala is a threatened species restricted to dune fynbos in the southeastern Cape floristic region.

A peculiarity of dune vegetation in the Cape floristic region is how many dune-thicket species belong to families that originated in the tropics and are generally not well represented elsewhere in the Cape. They include: 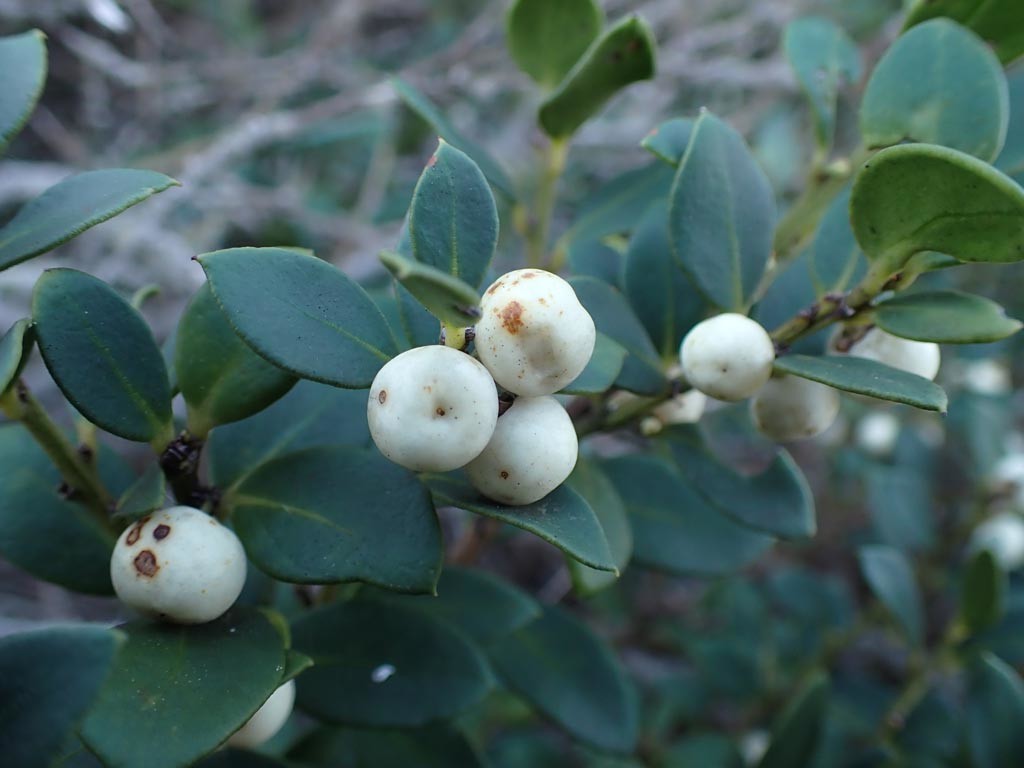 Above: The dune silky-bark (Robsonodendron maritimum; Celastraceae) is an example of a species restricted to the Cape floristic region’s dune thicket. 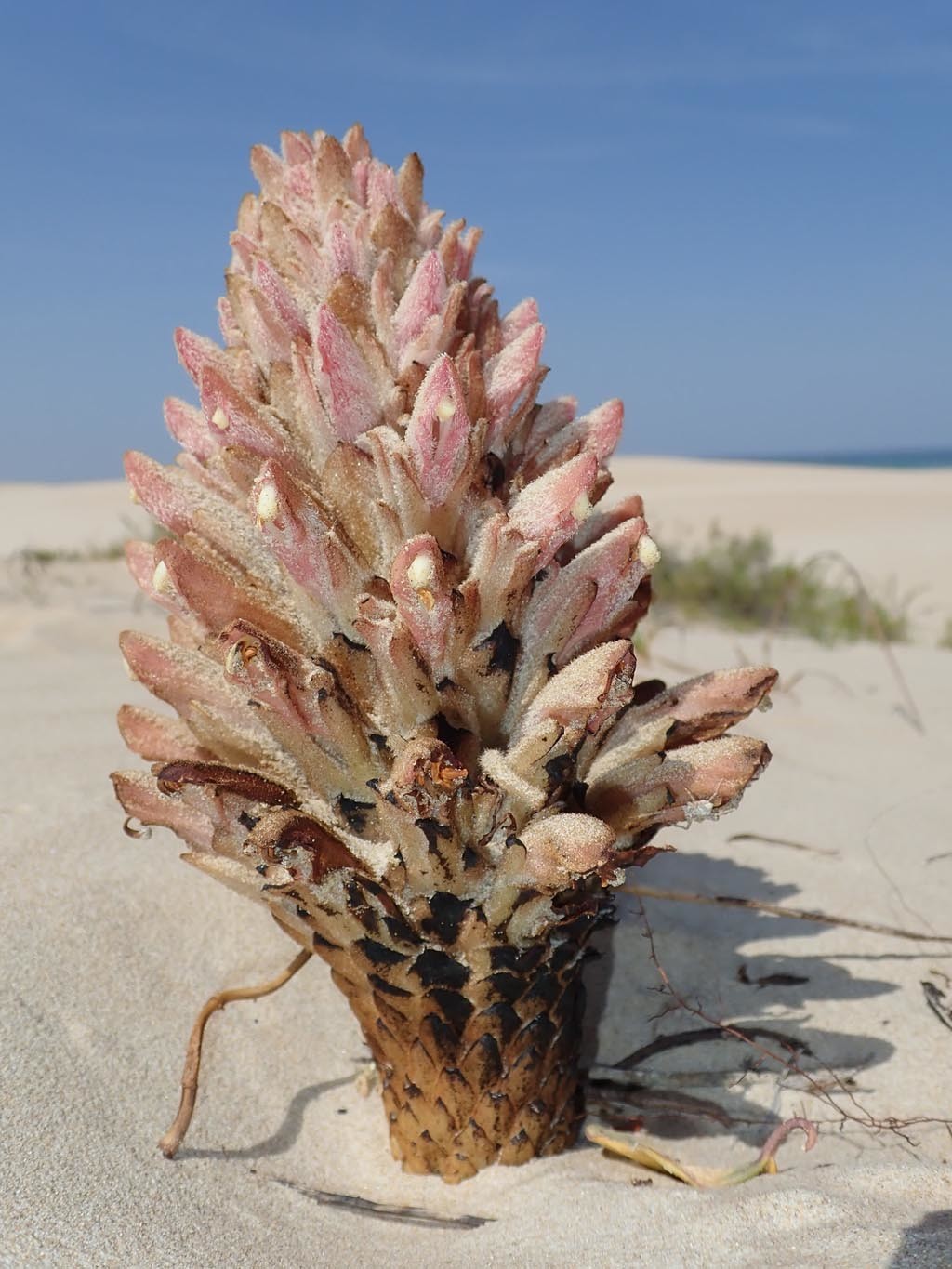 Above: This unusual member of the Cape coastal dune flora is Hyobanche robusta (Orobanchaceae), a threatened root parasite restricted to dunes in the southeastern Cape floristic region.

Our Living Libraries: Why are Botanical Gardens so important?
Today South Africa’s botanical gardens hold an extraordinary and diverse range of plant collections, representing South Africa’s megadiverse flora across all its ecosystems.
1 2 … 12 Next