Wildflower Wonders: Where to find the best blommetjies this Spring

This winter, after three long and dry years in succession, the rain came. The drought’s impact has been pervasive, affecting the economy, agriculture, tourism and much more. Above average rainfall this June has provided some respite and improved dam levels, but we are far from out of the woods yet.

However, good winter rains are making it increasingly likely that we will have some wonderful displays of wildflowers this spring. Already there are beautiful carpets of Oxalis giving their winter display along our road verges. We have hand-picked for you a selection of our favourite places to go and experience the Cape’s world famous wildflower displays. All of these stunning places are within five hours drive of Cape Town, easily accessible on a weekend for those of you with limited time available. 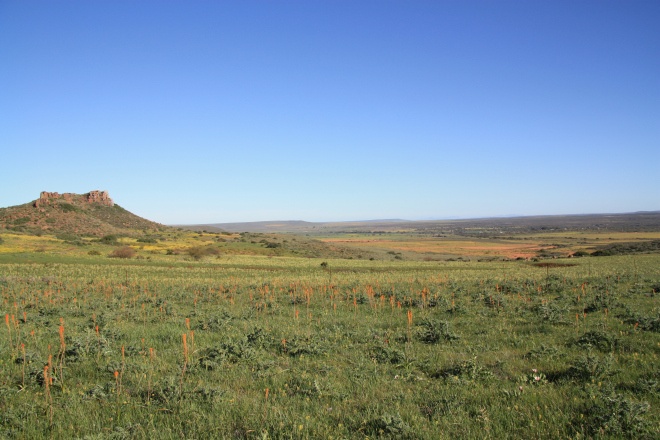 The small town of Nieuwoudtville lies at the top of the Bokkeveld Escarpment, five hours drive north along the N7 from Cape Town. It is not without reason that it is known as the ‘Bulb Capital of the World’. The town is home to Hantam National Botanical Gardens (NBG) one of South Africa’s newest NBGs, run by the South African National Biodiversity Institute (SANBI). Hantam NBG is 6000 Ha in size encompassing Nieuwoudtville Shale Renosterveld, Nieuwoudtville-Roggeveld Dolerite Renosterveld and Hantam Succulent Karoo.

This unique range of untransformed habitats makes this the place to see many of the rare and special plant species known from the Bokkeveld Escarpment. The garden has nine different hiking trails that allow those of differing levels of fitness to explore as they please. Members of the Botanical Society enjoy free entrance to this and all of South Africa’s NBGs. Additional tourist information for the area can be found at www.nieuwoudtville.com 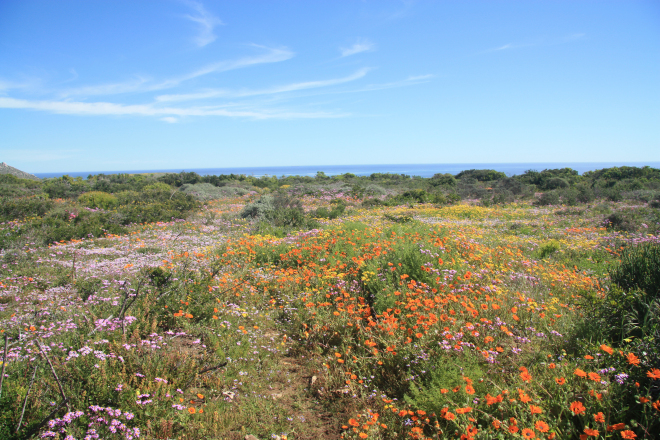 West Coast National Park lies on the coast between the small towns of Yzerfontein and Langebaan just 1.5 hours drive north of Cape Town. The park is a mix of Strandveld and Hopefield Sand Plain Fynbos.  During August and September visitors to the park are rewarded by the most spectacular displays of flowers in the Seeberg and Postberg sections of the Park. For the more energetic the two day overnight Postberg hiking trail can be done, with an overnight stop (bring your own tents) at Plankiesbaai. Bookings and tariff information can be obtained from Geelbek Information Centre on 022 707 9902. Entrance to the park is R76 for South African Nationals and residents (with ID) and free for Wildcard Holders. 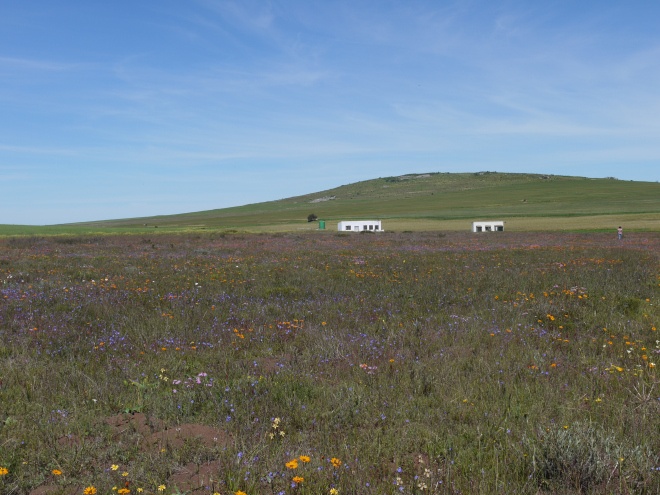 Tienie Versfeld Nature Reserve is 20 Ha in size and found just outside the Swartland town of Darling, an hour north of Cape Town. The reserve was formerly part of a farm that was donated to the Botanical Society by Marthinus Versfeld. Marthinus’s sister Muriel was one of the founder members of the Darling Wildflower Society. The reserve is open all year round, but the most spectacular blooms can be seen during the spring season from August to September. Entrance to the reserve is free. 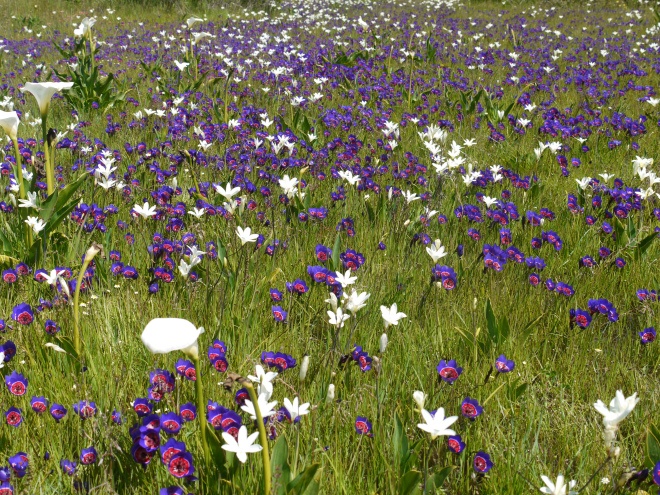 Also near the beautiful town of Darling is the fantastic Waylands Farm Wildflower Reserve. The reserve was founded by Fredrick Duckett in the early 1900s and is home to more than 300 different plant species, many of which are geophytes. The reserve forms an integral part of the farm and is grazed from late November to the end of April each year. The spring flower season reaches its peak from the end of August to early September. 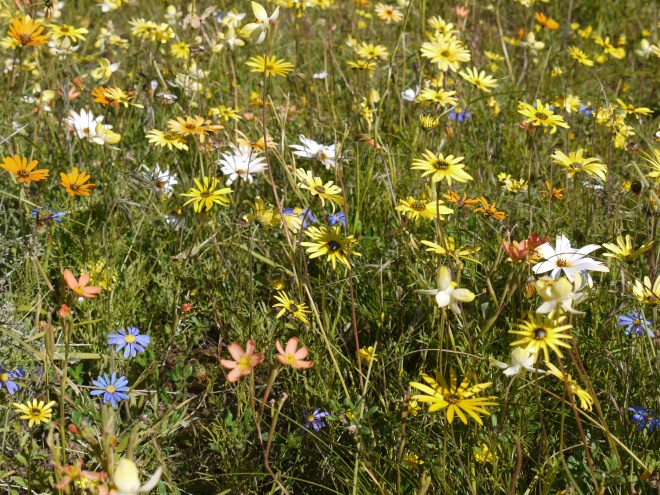 Three hours drive north of Cape Town on the N7 is the small town of Clanwilliam, which lies at the foot of the Cederberg Mountain chain. Adjacent to the municipal campsite on the banks of the Clanwilliam Dam is the beautiful Ramskop Wildflower Garden. There are more than 300 species of different wildflowers to be seen, and spectacular views down over the dam and up to the Cederberg mountains beyond. Entry is R25 and the gardens are open until 4:30pm during August and September. (Info: 027 482 8000). 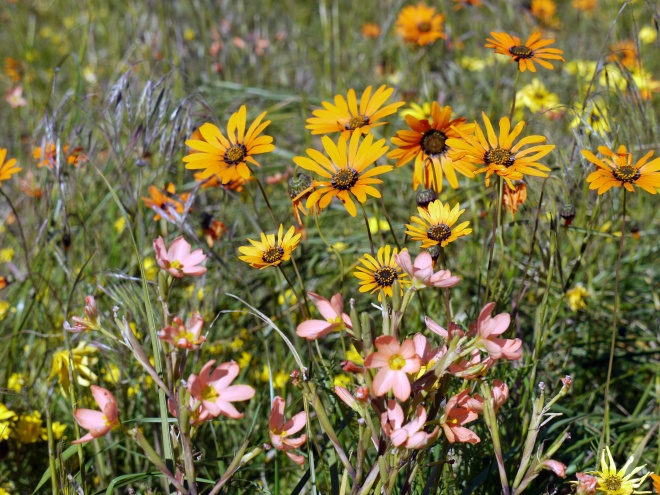 The Biedouw Valley is one of the Cederberg’s hidden wildflower gems. It can be reached either via Calvinia or the Pakhuis Pass from Clanwilliam. The Biedouw River is one of the tributaries of the Doring River. The valley is bounded by the Biedouw Mountains to the north and the Tra Tra Mountains to the south. The name ‘Biedouw’ refers to the common plant name ‘Bietou’, although there are several plants that go by this name so it is not clear to what species the name originally refers. In spring local farmers restrict livestock grazing in the area to further enhance the stunning wildflower displays. 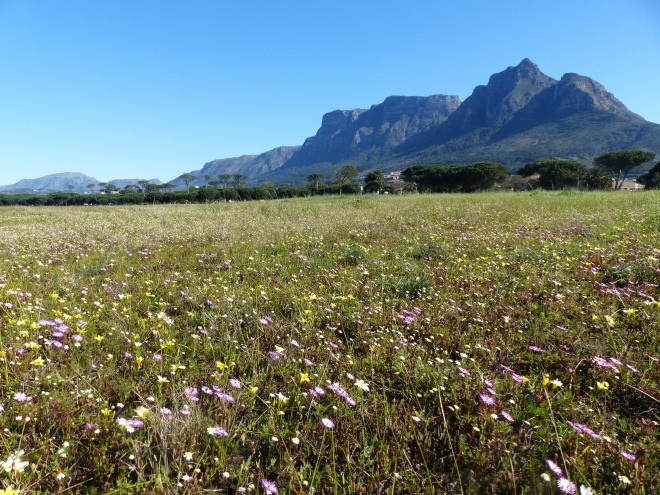 Rondebosch Common lies at the heart of Cape Town’s Southern Suburbs. This 40 Ha site is of international conservation importance, being one of the last fragments of Critically Endangered Cape Flats Sand Fynbos, a highly biodiverse vegetation type that only occurs in the greater Cape Town area. It is home to around 250 plant species.

The site is under the custodianship of City Parks and their work is supported by the Friends of Rondebosch Common, affiliated with the Wildlife and Environmental Society of South Africa (WESSA). Each spring the Friends run a series of walks lead by dedicated volunteers to see the spring flowers on the Common. All are welcome and becoming a Friend is encouraged to support the valuable conservation work taking place. More information can be found on the Friends’ Facebook group.