Karoo Desert National Botanical Gardens is one of SANBI’s oldest botanical gardens. Located in the town of Worcester, two hours from Cape Town along the N1, this beautiful garden is well worth the visit. Karoo Desert NBG showcases the rich diversity of unique and extraordinary flora that comes from the more arid parts of South Africa including the Richtersveld, Succulent Karoo and Klein Karoo. 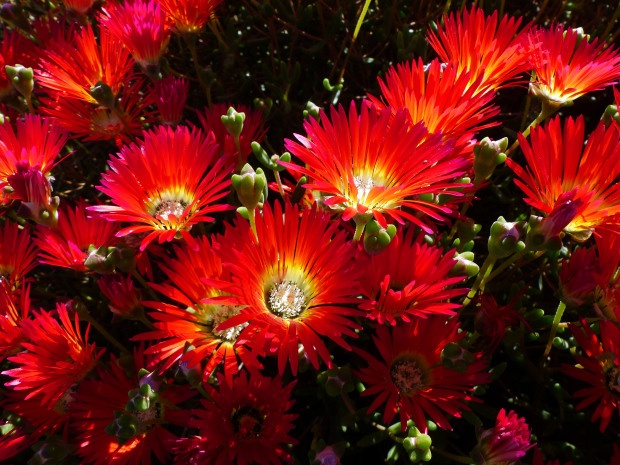 Above: The intense red flowers of Drosanthemum speciosum.

As we enter the hotter summer months and the Karoo veld hunkers down to survive the increased heat and aridity, we take a look back at the spectacular blooms that wow visitors to the garden during late spring and early summer. Thanks to the horticultural skill and foresight of the gardens’ staff, Karoo Desert NBG offers a veritable firework display of blooms in one of the country’s most arid and water scarce botanical gardens, continuing well into October and the start of the summer season. Their work stands testament to what can be achieved when gardening in South Africa’s relatively dry climatic zones. It is a garden that inspires. 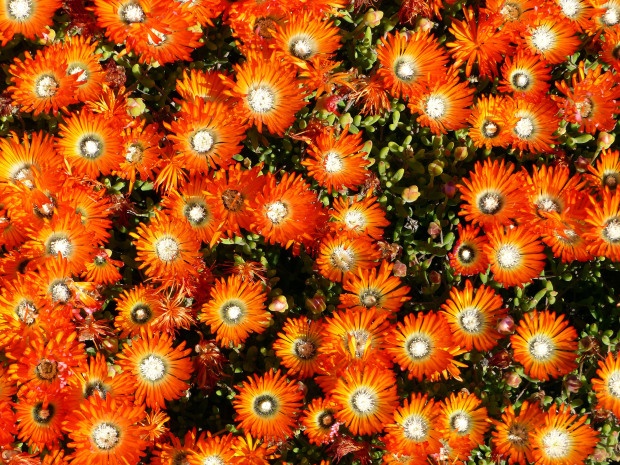 The majority of late spring and summer colour at Karoo Desert NBG comes from the vygies. So what is a vygie? The word ‘vygie’ is a South African term derived from Afrikaans and refers to a low growing, sometimes creeping, sometimes shrubby group of succulents with often spectacular flowers from the Aizoaceae family. Many make popular and easy to grow waterwise garden plants and are the mainstays of the September and October blooms at Karoo Desert NBG. 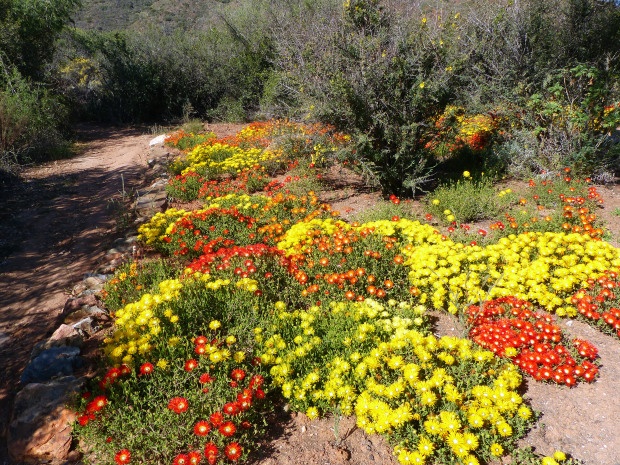 Above: Different colour forms of Drosanthemum speciosum used together to great effect for bold colour at Karoo Desert NBG.

One of the most vibrant of this group that makes Karoo Desert NBG famous is Drosanthemum speciosum, easily recognisable with its intense red flowers. There are also a few other colour forms, with this species also coming in orange, yellow or even pink. A truly local bloom, it is also known as the Worcester-Robertson vygie or bergvygie. They are also known as ‘municipal workers’ in reference to their flowers opening at 9am and closing for the day at 5pm. In cultivation their grow easily from seed and can be found in Mediterranean climate gardens worldwide. For the best flowering displays they should be replaced every three years as the plants become more woody with age. 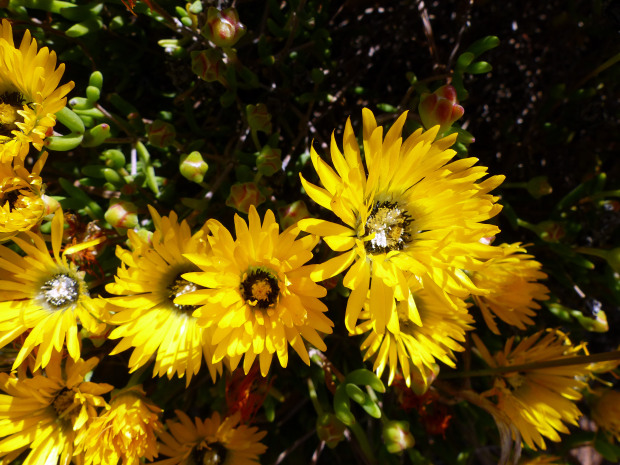 Above: Yellow form of Drosanthemum speciosum.

Another mainstay of Karoo Desert NBG is Drosanthemum bicolor, another small shrubby vygie, with stunning red and yellow flowers. In Afrikaans it is known as the ‘tweekleurporseleinbos’. In the wild it grows on hillsides in the western Little Karoo, growing on soils derived from Malmesbury Shales. It is thought that bees pollinate the brightly coloured flowers of this species. Following pollination seed capsules are produced that only open to disperse the seeds inside when rain comes, thus ensuring more likely survival of any newly germinated seedlings. Drosanthemum bicolor is also easily cultivated and will grow in most gardens across the Western Cape. 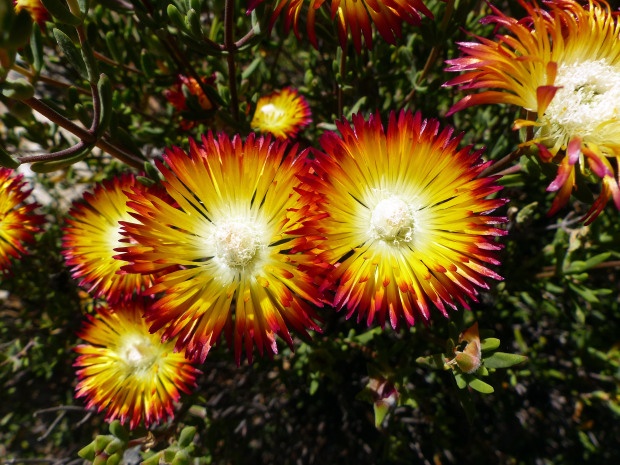 Above: The spectacular multicoloured blooms of Drosanthemum bicolor.

The vibrant deep pink blooms of Lampranthus multiradiatus can also be seen flowering in late spring and early summer at Karoo Desert NBG alongside the red, orange and yellow Drosanthemum. Those crafting this garden are not afraid to place vibrant and contrasting colours together. In fact, the genus name ‘Lampranthus’ actually means ‘bright flower’, derived from the Greek words ‘lampros’ meaning ‘bright’ and ‘anthos’ meaning flower. There are more than 140 species of Lampranthus, mainly confined to the winter rainfall areas of the Western Cape. In cultivation they are easily grown, attracting bees into the garden. 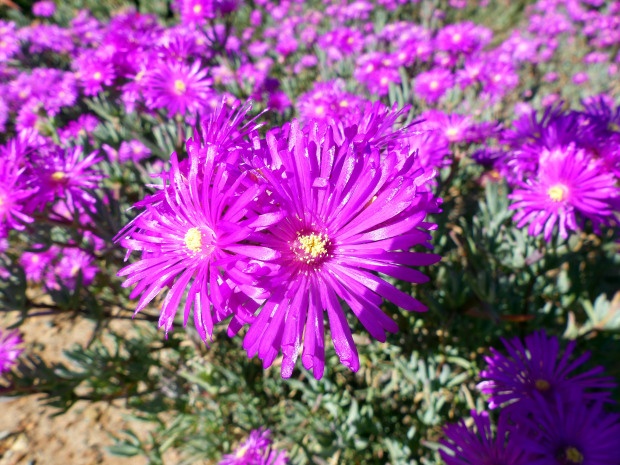 Above: Lampranthus multiradiatus in bloom at Karoo Desert NBG.

As climate change makes water an ever scarcer commodity in South Africa, gardeners need to become more innovative with their plant choices, growing indigenous and waterwise species where possible. Karoo Desert NBG has shown us how locally indigenous vygies can be used to create a bold and spectacular display, leading the eye through the gardens to the mountains beyond. It shows us what is possible in our own gardens, bringing colour as we garden for the future.