Celebrating our floral heritage at the Leeuwenhof Estate

Above: Avid gardeners who attend the Lotus River Secondary School visited the Leeuwenhof Estate as part of Heritage Day celebrations, and took a moment to pose on the steps of the Manor House during their walk through the new indigenous gardens.

From the Cape Flats to the slopes of Table Mountain, our floral heritage is bringing people from different walks of life together – centred around the historic Leeuwenhof Estate.

This estate is the home of the Premier of the Western Cape and his family, situated in the Gardens area in Cape Town. But more recently, it has also served as a hub for a budding horticultural team – including the Botanical Society of South Africa – to carefully plan and re-introduce indigenous plants to the historic garden. 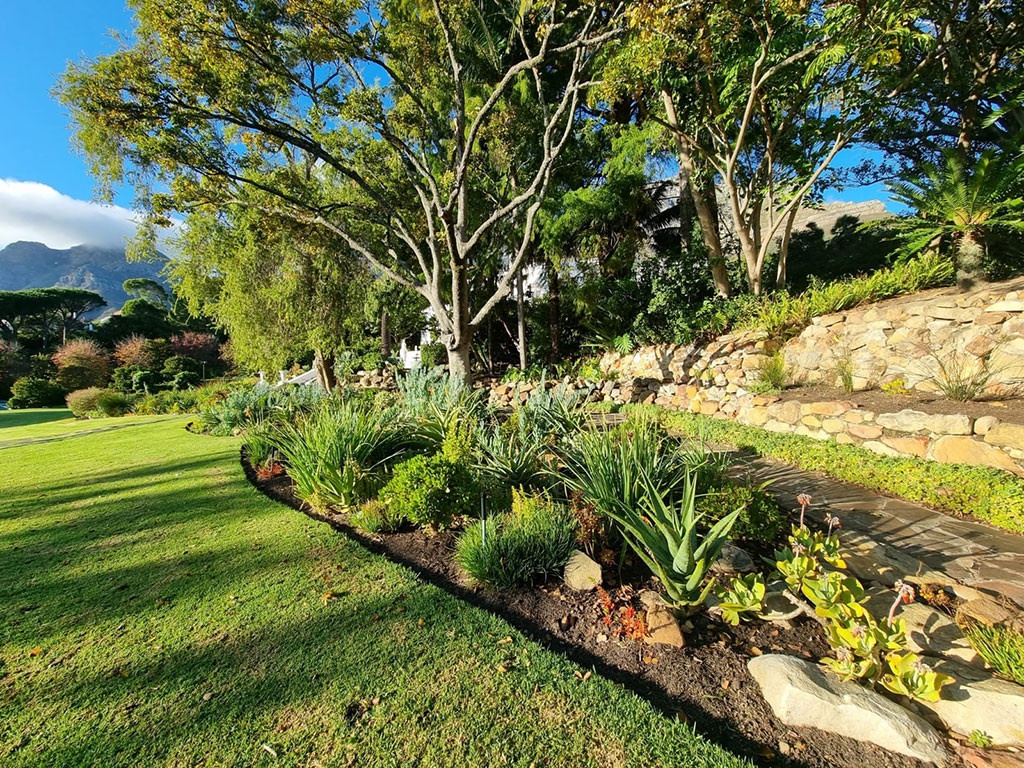 Above: Indigenous species such as Aloes were added to the Leeuwenhof Estate gardens. In fact, succulents were given particular attention in the garden, to bring new colour and texture to the plant beds.

BotSoc teamed up with the South African National Biodiversity Institute (SANBI), the Kirstenbosch National Botanical Garden team under the leadership of the curator Werner Voigt and the Leeuwenhof Estate team, led by the province’s First Lady Tracy Winde and Estate Manager Yoliswa Sihawula, to bring this project to life.

Antonia de Barros, BotSoc’s General Manager says, “We started planning together in 2021, to find ways to celebrate the rich natural heritage of the Cape Floral Kingdom, and especially Table Mountain, at Leeuwenhof, which is itself steeped in history. Over the course of more than a year, the garden was carefully planned and an array of indigenous plants and trees were planted.” 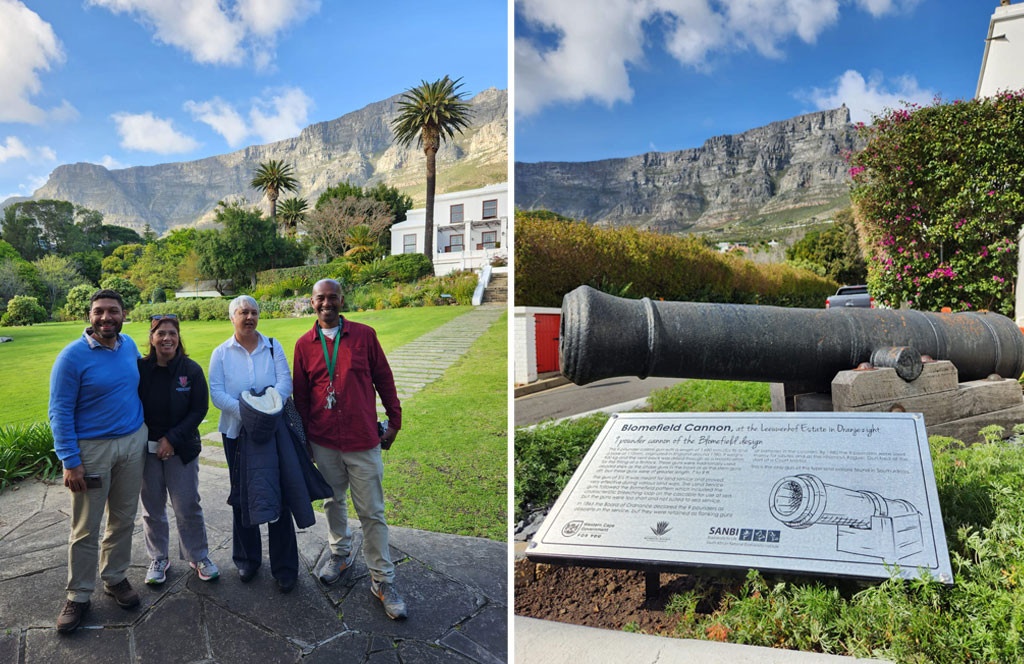 Left: The journey to re-establish indigenous plants has been particularly important to BotSoc’s General Manager Antonia de Barros, seen here with Kirstenbosch curator Werner Voigt (left), Roleen Ellman, Head of Kirstenbosch’s Environmental Education programme and Zane Matthews from the Kirstenbosch Outreach Greening Programme. Right: Interpretative signage has been added to the garden and to some stand-out features such as the Blomefield Cannon.

For Western Cape Premier Alan Winde and his wife Tracy, the garden serves as the ideal opportunity to make the Leeuwenhof Estate more accessible to the public.

The estate itself is 329-years old, and as such, the Leeuwenhof garden had become home to many exotic species planted over the centuries. Antonia says, “The exotic species and their origins are part of our collective history at these gardens. There are many heritage specimens of exotic species here. But what a wonderful privilege to be a part of reintroducing, bringing home and celebrating our indigenous plants at Leeuwenhof.” 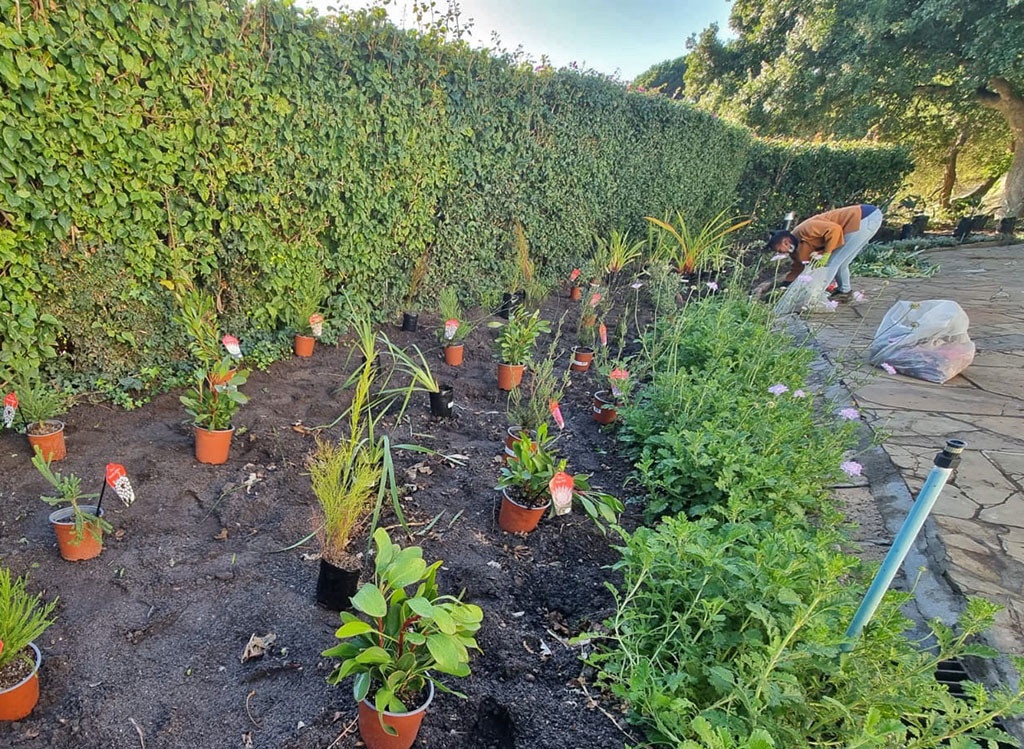 Above: Estate Manager Yoliswa Sihawula played a leading role in deciding which plants to re-establish and where to plant them.

With experts such as Werner Voigt, Cherise Viljoen, Rupert Koopman and Gianpaolo Gilardi of BotSoc and Yoliswa, species special to the area were included. Themed sections in the garden have been enhanced covering succulents, cycads and fynbos, among others. One bed was dedicated specifically to sunbirds and Erica species. The terraces were covered in fynbos found on the slopes of Lion’s Head – including a range of pretty Leucadendrons and Proteas. Fruit-bearing trees nod to the historical agricultural nature of Leeuwenhof. And incredibly special species, such as Erica verticillata – which became extinct in the wild but was successfully reintroduced – have also been planted.

At the same time, historical exotic species such as the Oak trees and 200-year old Bougainvillea were kept. 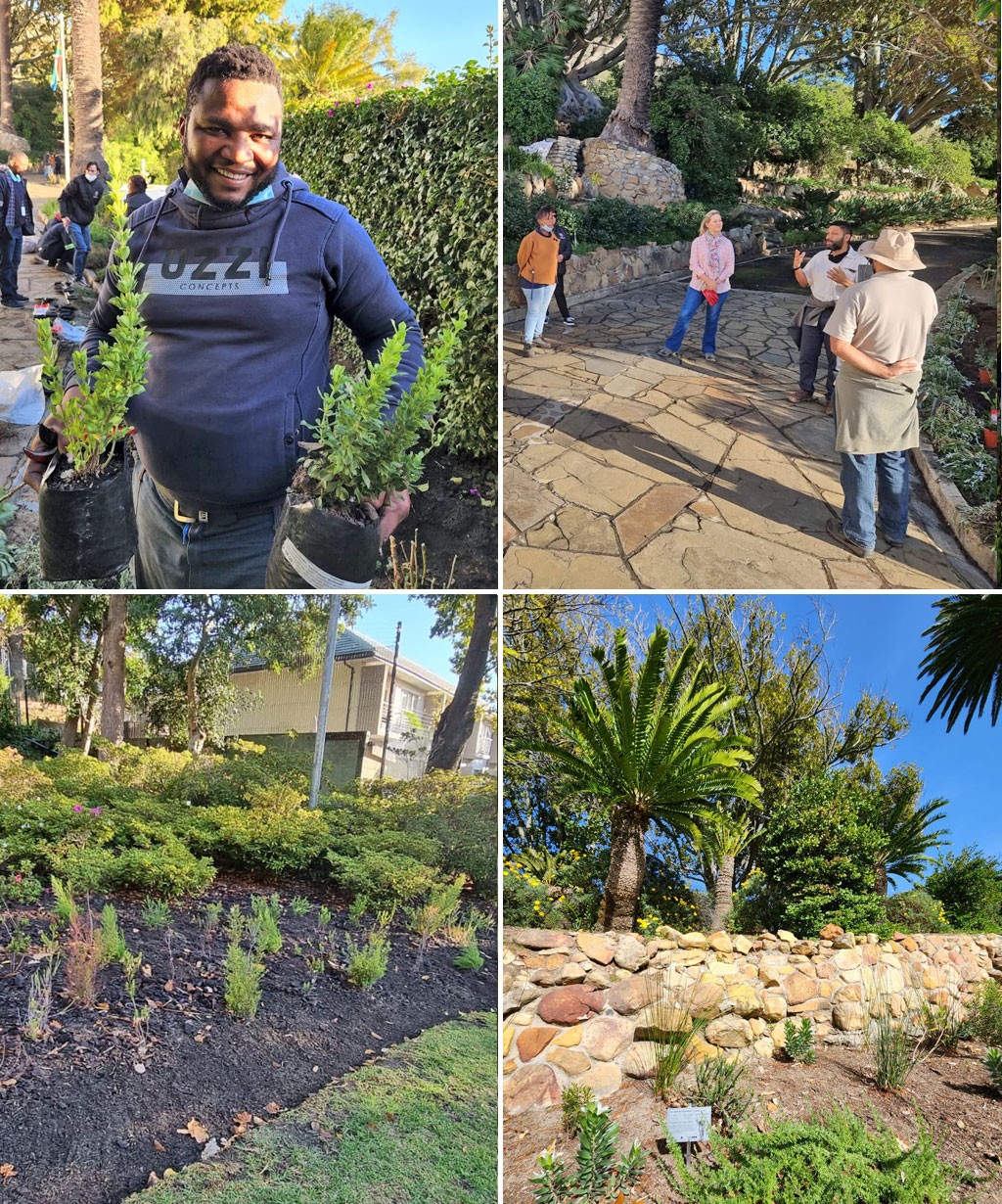 Above: While it was hard work, there was always time for a smile, as shown here by Asanda Yaphi (top left). During the first day of planting, Werner Voigt, curator of the Kirstenbosch National Botanical Garden provided planting tips with Tracy Winde and the rest of the team taking notes.

To crown the new-look gardens, interpretative signage, developed by BotSoc and the Kirstenbosch NBG, was installed. The storyboards and carefully placed plant labels designed by Jeanette Erasmus from LoveGreen Communications, brings our connection with nature to life.

Then – more than a year and a half after discussions first started – it was time for the unofficial launch of the garden.

A group of avid gardeners from Lotus River Secondary School on the Cape Flats met with Tracy Winde and representatives of BotSoc, SANBI and the Iziko Museum at Leeuwenhof, to share stories on Friday 23 September. These young people participate in the Kirstenbosch Outreach Greening Programme and have established their own indigenous garden on the Cape Flats. 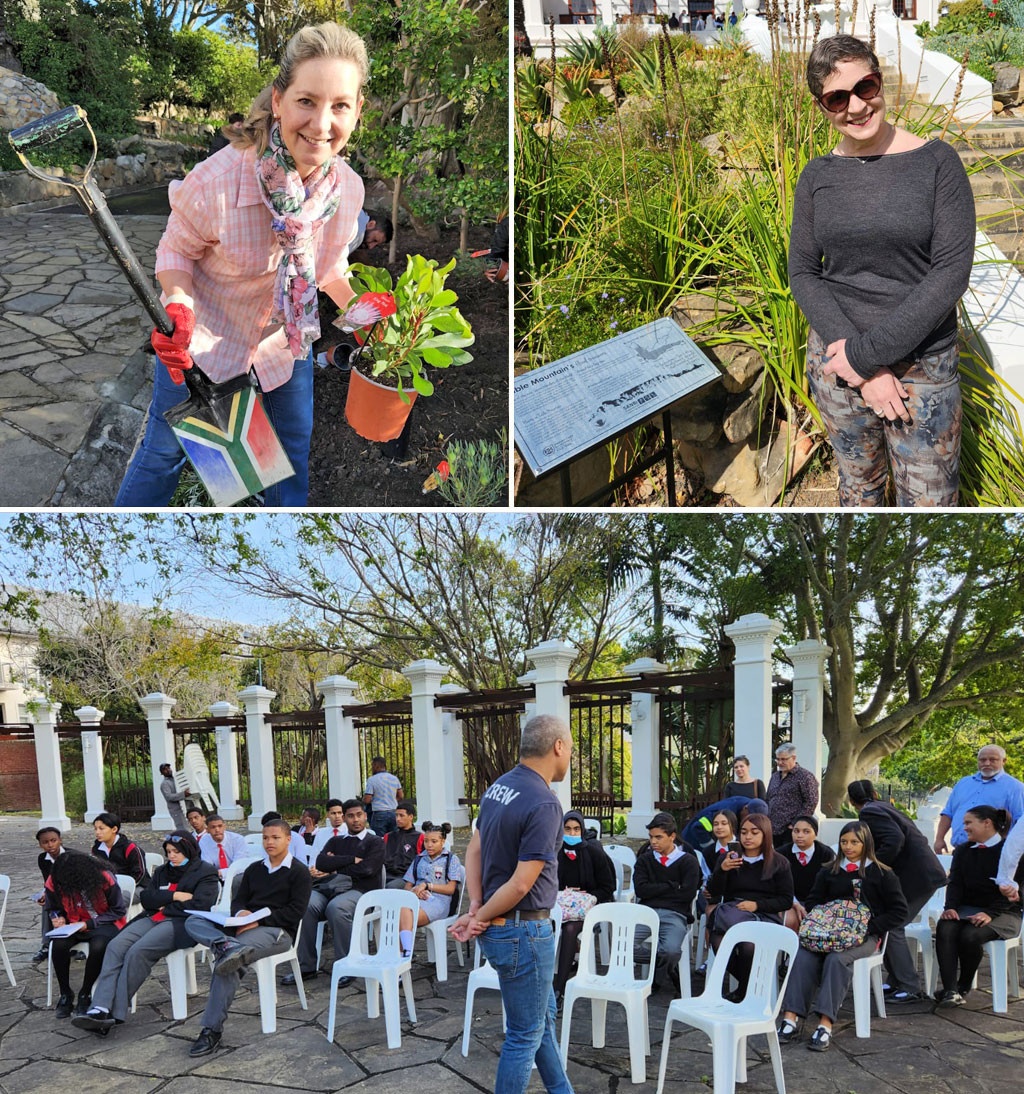 Above: Everyone got involved in the fun task of planting the indigenous species, including the Western Cape’s First Lady Tracy Winde (top left). Jeanette Erasmus of LoveGreen Communications (top right) took a moment to pose with one of the interpretative signs she designed for the garden. And then it was time for the unofficial launch, with children from Lotus River Secondary School visiting the garden, led by Glynn Alard of the Iziko Museums.

Speaking to the children, Tracy Winde said, “It is our privilege to share this beautiful property with you so that you feel the power of nature and of this beautiful place, so that it uplifts you and inspires you to take whatever it is that you learn and what you feel here today back into your community…The gift of Leeuwenhof is that it can inspire you to be your best self.”

Glynn Alard, Educator: Natural History at the Iziko Museums, also spoke to the attendees, saying that the indigenous garden not only connects this area ecologically to the natural vegetation, “but it is symbolic for me as a sign of return and reclamation. It’s really meaningful and beautiful that indigenous plants have returned to this landscape.”

Lotus River High Assistant Teacher Kurtley Fortune said he hadn’t realised places like Leeuwenhof even existed. “I’m really involved at the school’s eco-club and gardens, and with work at Princess Vlei. But Leeuwenhof is so quiet and so beautiful and I didn’t know this place existed in town.”

Antonia says, “BotSoc is all about inspiring South Africans, wherever they are and what ever communities they come from, to make connections through and with nature.

And that’s exactly what this day was all about: young people who love indigenous plants coming from the Cape Flats, sharing their stories of our natural heritage with the first lady of the province, and she in turn sharing with them. It’s a wonderful story of our proud connection with our flora, all of us.”

In fact, for Antonia, this project couldn’t be more personal, or rewarding. “I started my career working with school groups and unemployed women on the Cape Flats to share with them the joy of our natural heritage, and gardening with it with Zane Matthews from Kirstenbosch. That was in 1998. Now, 24 years later, this gathering at Leeuwenhof truly feels like the work we have done and continue to do has come full circle. It’s personally very exciting for me.”

BotSoc’s General Manager Antonia de Barros explained why this project means so much to her during planting day, to highlight the importance of indigenous flora.

The Western Cape’s First Lady Tracy Winde tells how the Leeuwenhof Estate garden project came together, and how her and Premier Alan Winde’s vision to transform the estate into a meaningful experience for visitors provided impetus for the new garden.

Zainab Burton of Lotus River Secondary School shares her poem on the importance of heritage at the Leeuwenhof Estate, inspired by the scenery at the estate. 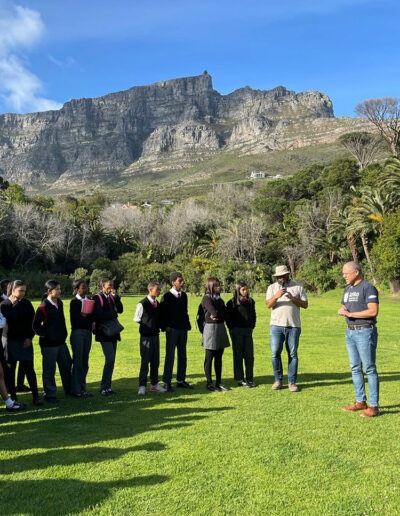 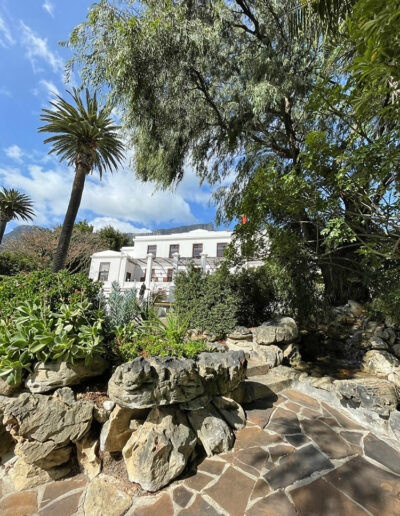 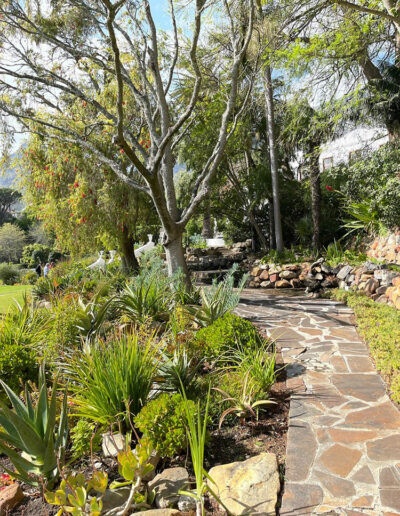 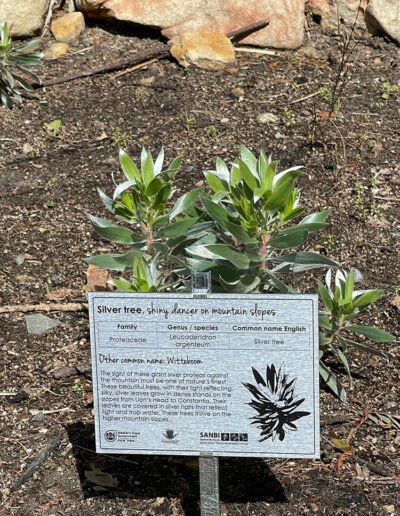 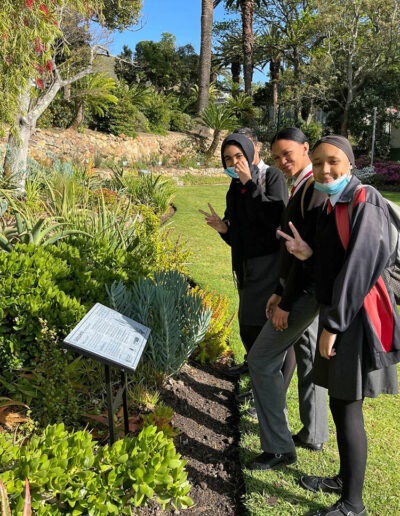 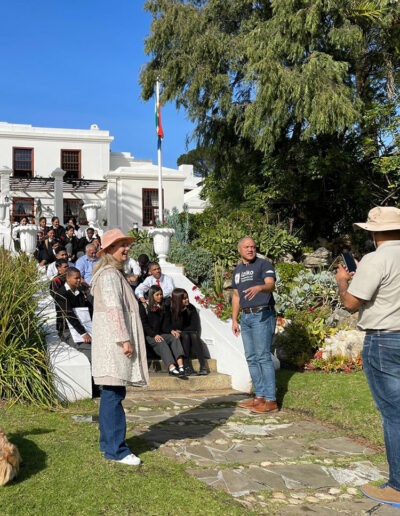 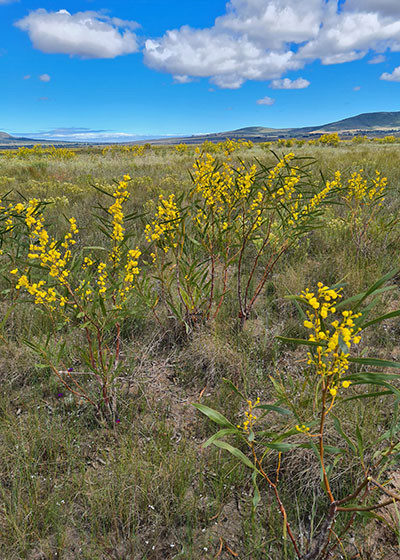 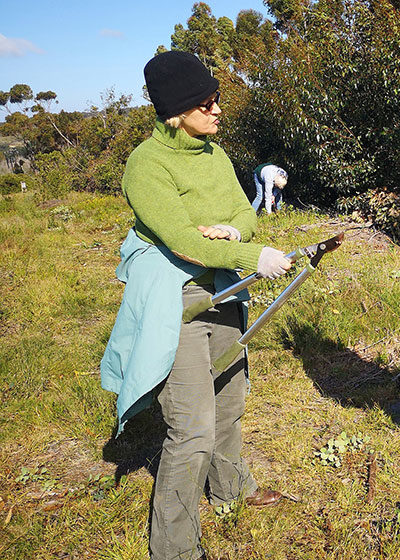 Six ways to give back to the environment this Mandela Day and beyond
“I dream of our vast deserts, of our forests, of all our great wildernesses. We must never forget that it is our duty to protect this environment”. Nelson Mandela 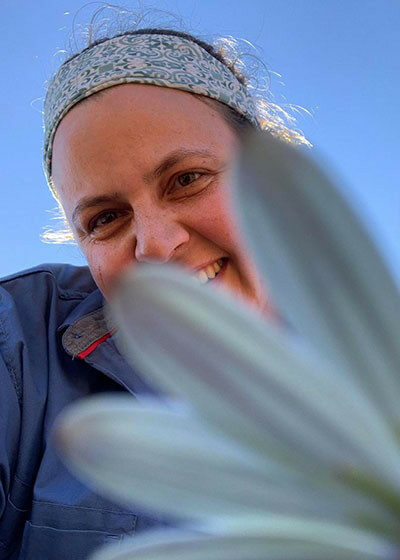 Webinar: BotSoc in action
Isn’t that quite simply the power of our BotSoc community: members, young and ‘older’, helping to improve our natural world?
1 2 … 10 Next