Interview with Elise Buitendag, author of ‘Genesis of a Garden’

‘Genesis of a Garden’

Last week we launched this year’s Botanical Society Awards, now open to nominations before the 15 May. In honour of this, this week we interviewed one of our past awardees, botanist, artist and author of ‘Genesis of a Garden’ Elise Buitendag.

Elise’s career started as a botanical officer at the Botanical Research Institute in Pretoria (1962-1964). After a year at Grootfontein Agricultural College in the Karoo, she and her husband Carel moved to Mbombela (Nelspruit). Here Elise spent twelve years working as botanist at the Lowveld National Botanical Gardens (NBG).

Following this, she was employed by the Department of Agriculture, where for 21 years Elise was South Africa’s participant at technical meetings of The International Union for the Protection of New Varieties of Plants (UPOV).

She chaired two of the six UPOV technical working parties and subsequently became the only person outside of Western Europe to be appointed chairperson of the UPOV Technical Committee, which is the highest technical body of this prestigious international union and received two bronze medals and a silver in recognition of her accomplishments.

The book ‘Genesis of a Garden’, written by Elise and edited by Wendy Sippel, documents through artwork and narrative, the story of the first twelve years of the Lowveld NBG. 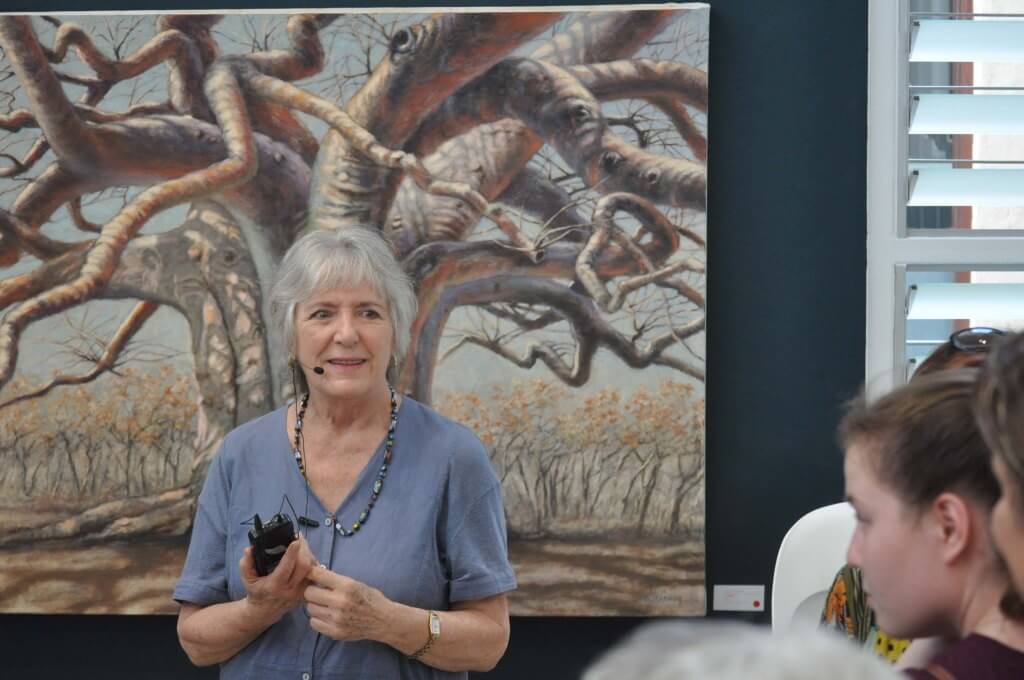 Above: Botanist and artist Elise Buitendag at the exhibition and book launch of ‘Genesis of a Garden‘.

What is your background?

Elise grew up on a flower farm, where her father grew cut flowers. From early on this was an inspiration for Elise as she grew to love the plants and the soil. After studying botany, she then started work at the National Herbarium in Pretoria. After getting married Elise and her husband Carel moved to Middelburg where she spent a year doing research into the phenology of Karoo bushes.

They then moved to Nelspruit where their two sons were born. Soon afterwards, the Lowveld NBG was founded and Elise started working there as botanist. Elise’s role encompassed compiling a checklist of all plant species occurring naturally within the garden area, and identifying all plant specimens collected, as well as providing plant identification services, talks and guided tours to the public. 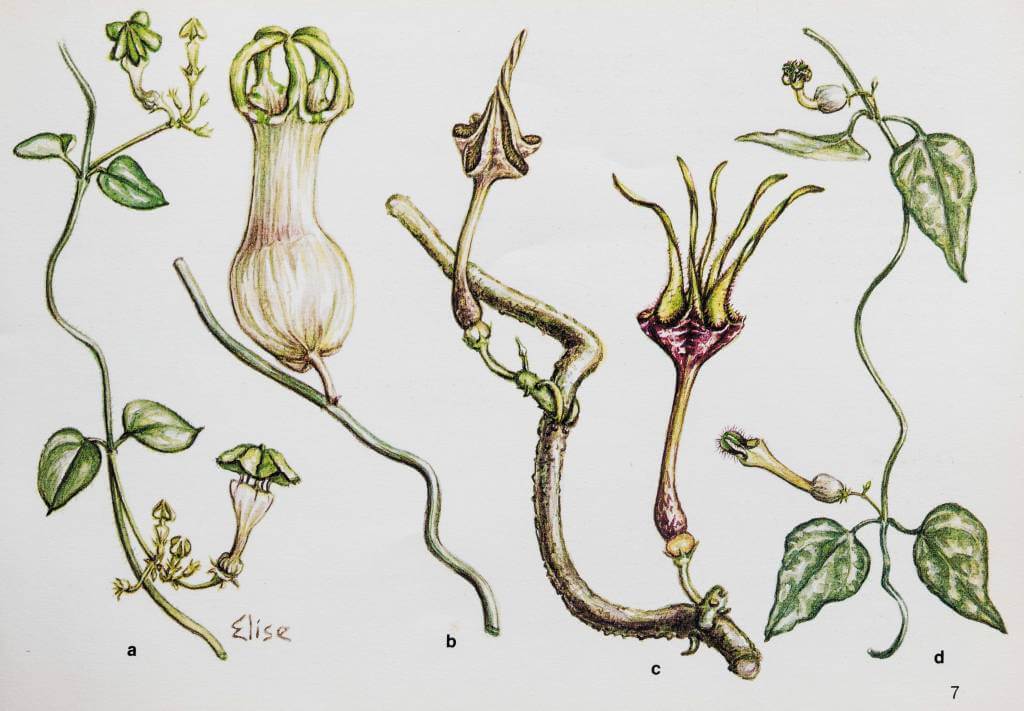 What is your favourite part of the Lowveld NBG and why?

Elise’s favourite part of Lowveld NBG is the walk down to the rocks overlooking the Nels River. When the garden was first founded, this area was still bush until the viewpoint we see today was carefully cleared, taking great care not to damage any valuable trees. This part of the garden remains particularly special to Elise from the memories of seeing this new view from the garden for the first time.

What time of year is your favourite to visit Lowveld NBG?

Elise particularly enjoys visiting the Lowveld NBG when the seasons are changing during autumn or spring. At this time of year one can see four seasons in one view with spring flowers, autumn leaves, evergreen trees and skeletal silhouettes like the barren, fruit-laden kiaat (Pterocarpus angolensis).

In early spring the Dombeya come into flower with the Lowveld chestnut also in full bloom, alongside the red blooms of Erythrina and the rusty red-leaved fig trees. Elise loves the muted colours of the Lowveld, the ruggedness of the bush. 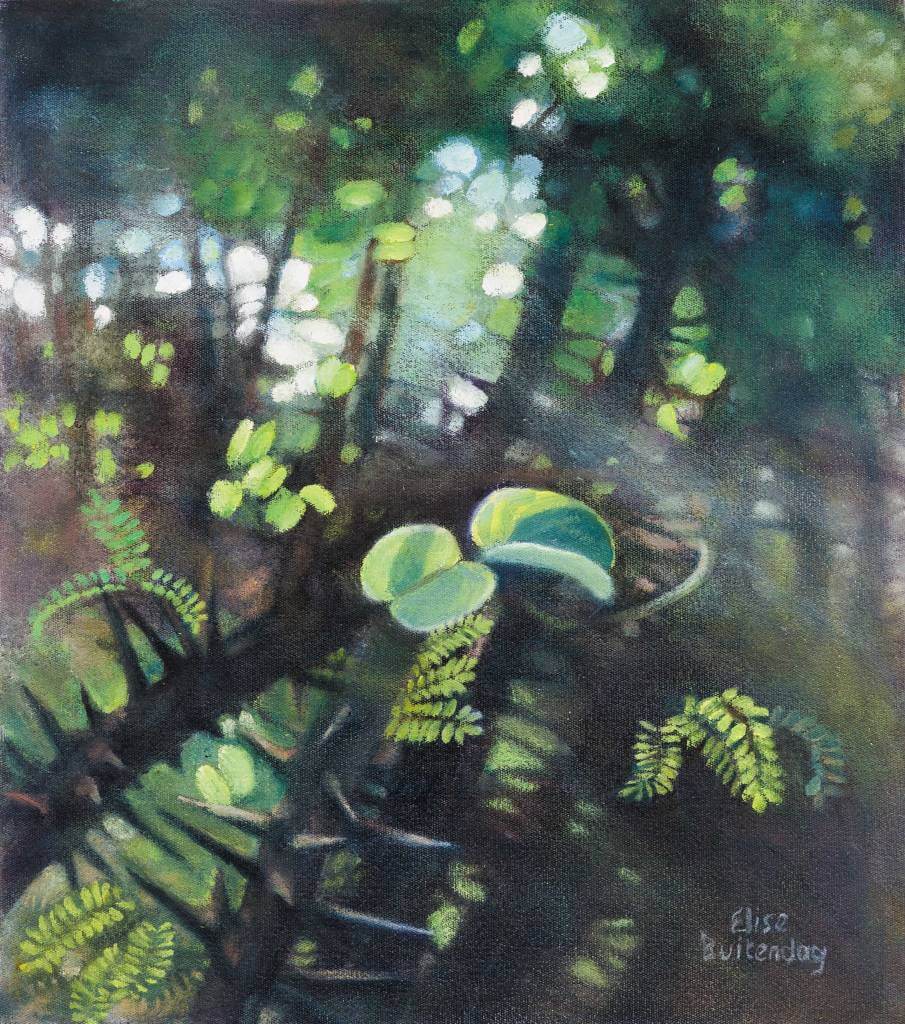 Above: Oil on canvas of a typical thicket with Bauhinia and Dalbergia foreground (2018).

What inspired you to write ‘Genesis of a Garden’?

The writing of a book started off because Elise was anxious to have some of her artworks recorded in print, since she has no photographic record of more than 1000 of her paintings. She started the process by adding interesting bits of information and descriptions for each artwork. But the book was to take a different course.

Elise was often invited to tell the story of the Lowveld NBG and was encouraged by various groups to put it on record. So she incorporated the story of the garden amongst the paintings and the book grew into the coffee-table ‘Genesis of a Garden’.

Elise and her competent editor Wendy Sippel finally produced a generously illustrated book of artwork and stories about the first twelve years of the garden’s history. 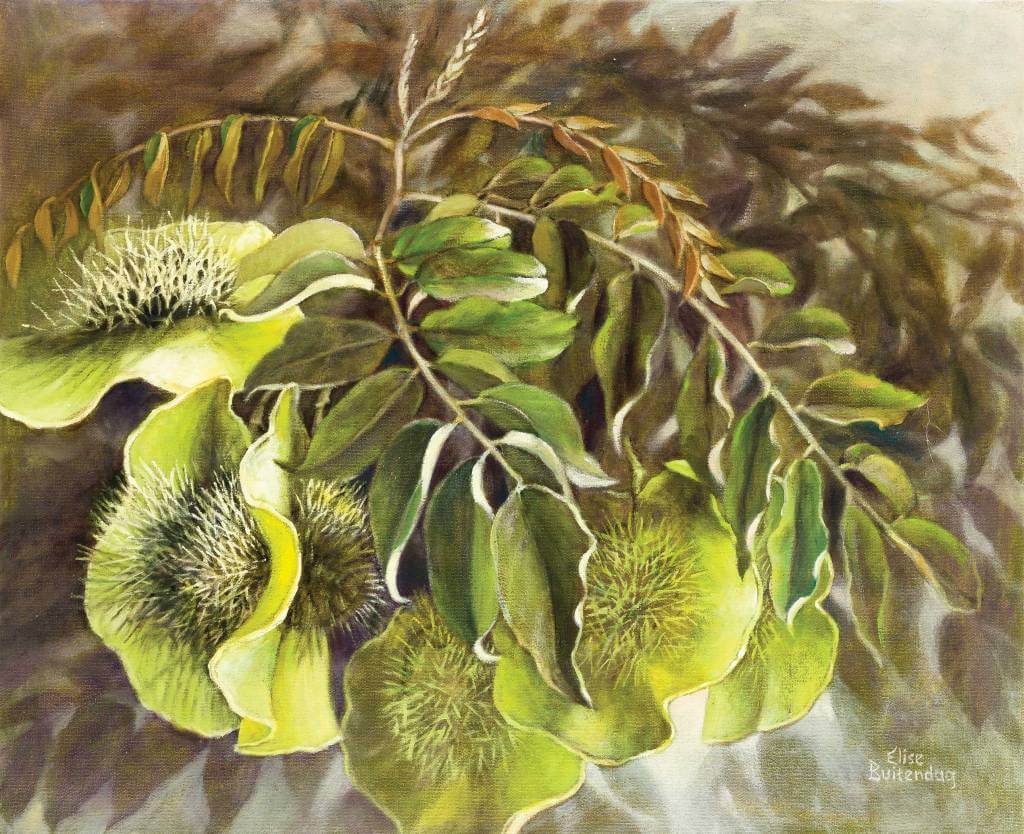 Above: Oil on canvas of green Kiaat pods (Pterocarpus angolensis).

Elise grew up with plants and they have always been a part of her being, inspired to have a deep appreciation in particular by her father. Elise remembers him receiving boxes of propagation material of Dahlias, Paeonies and other plants from the Netherlands.

She watched as he lifted them from the sawdust with the greatest of care. Elise also remembers long beds of Irises. As they grew, Elise would lie on the ground and watch the world growing bluer each day.

What is your favourite plant and why?

Elise’s favourite plants are the Ceropegia species, belonging to the Apocynaceae family. Ceropegias have distinctive lantern-like flowers, that are pollinated by insects captured inside the tube. But the flowers are small and inconspicuous and these dainty climbers are not easily spotted in the Lowveld bush. 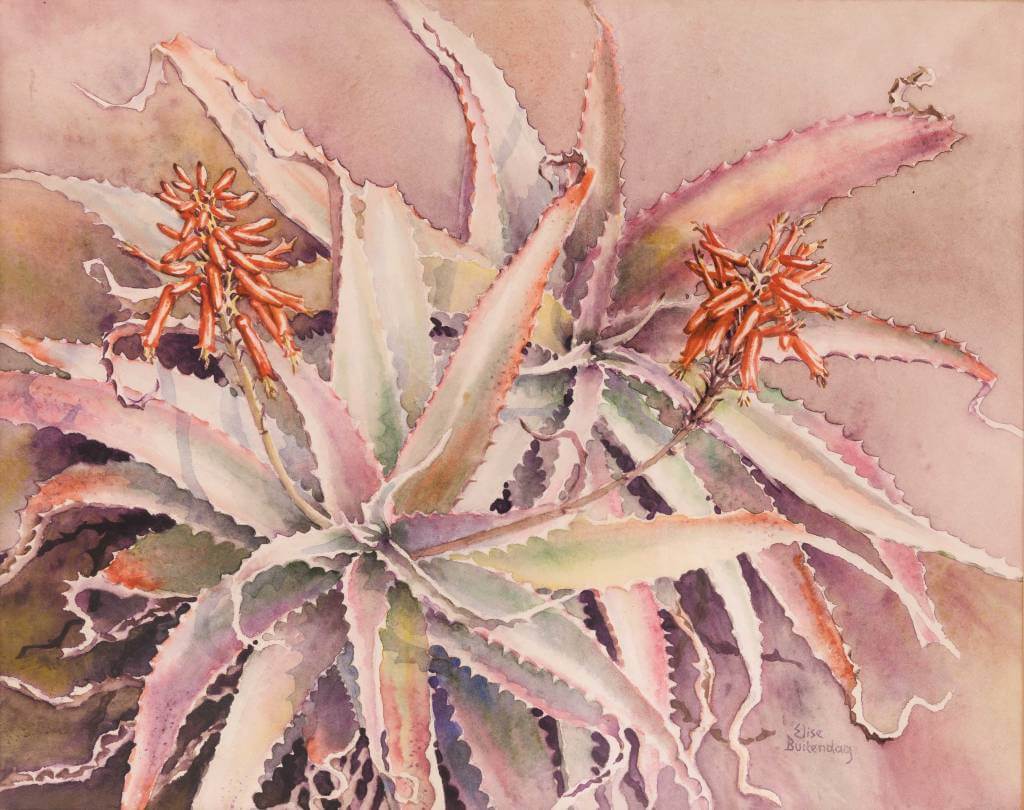 Above: Watercolour illustration of Aloe arborescens (1988).

What is your definition of botanical illustration and why is it important?

Although one needs to include all the key diagnostic features of each species, and must never make a plant look more beautiful than it is, it is still a creative process. And this creative process can never be rushed because it should never become a rote exercise – observation is the thing.

Elise remembers Cythna Letty working in her bay at the herbarium, where the window cast light on her subjects from the left-hand side. This single source of light created a stunning array of different levels of light and shadow.

What inspired you to start painting botanical artworks?

Elise has always had a love of plants, dating back as far as her childhood. Her artwork has always focused on the natural world around her. Even as a child she painted plants from life. She is inspired by a particular love of organic lines in nature, in contrast to manmade geometry. 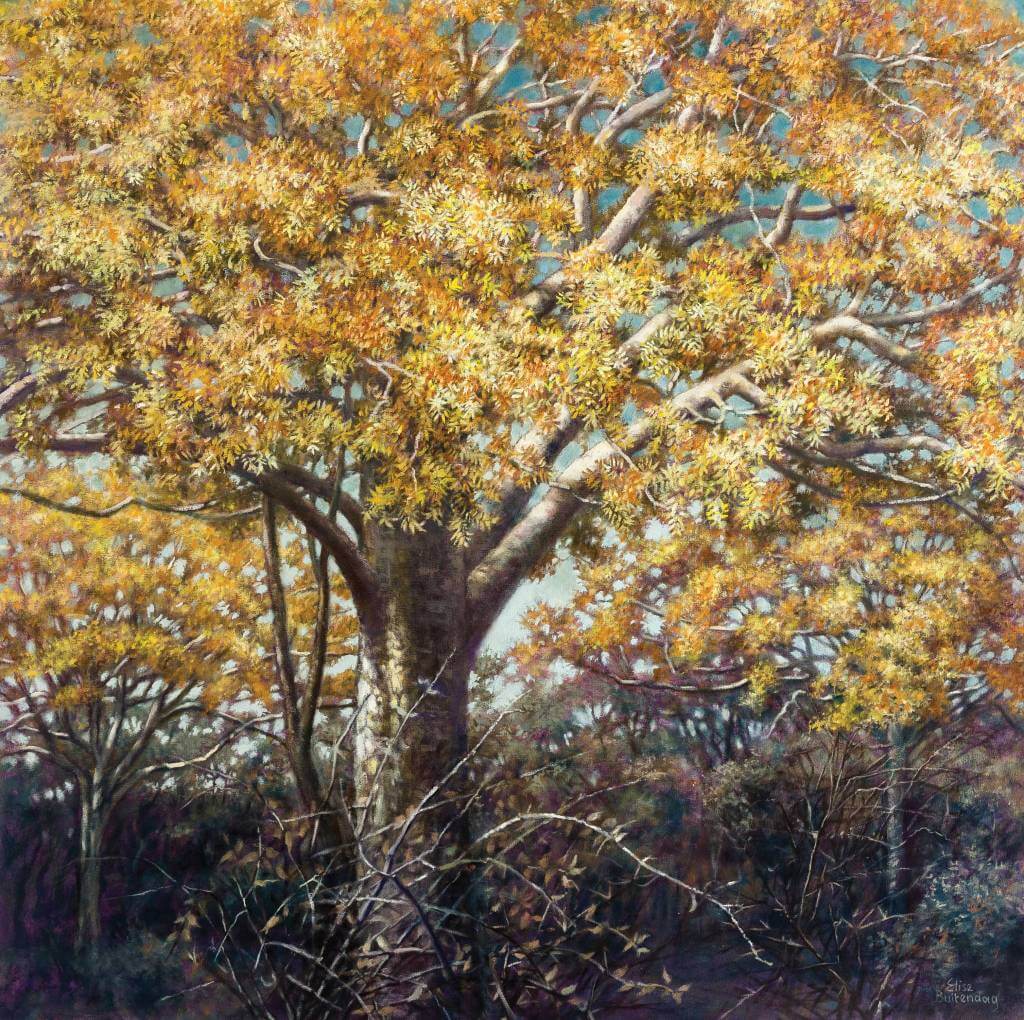 Above: Oil on canvas of Kirkia acuminata in autumn (2007).

How do you choose the subjects of your artwork? Are there specific qualities that particularly attract you to painting certain plants?

For about 25 years Elise’s artwork encompassed many watercolour works of specific species for botanical researchers as well as general commissions of Lowveld flora. When she began with oils, she felt that subject matter was less important than mastering the technique.

Now, after many years of getting to know and love the Lowveld bush, Elise’s work draws a different focus: the soul of the plant in the context of its environment. The Boscia, for instance, she sees as a symbol of perseverance in an arid environment.

Do you prefer to create your artworks working from photographs or from life?

Elise prefers to create her artworks working from life, but one cannot spend hours in the bush painting a particular subject. She does not copy a single photo to produce an artwork but rather uses the camera as a referencing tool.

This can be compared to the approach of the old masters where they would use sketches taken from life to inform the creation of their artworks. Elise believes that to truly capture the soul of a plant in botanical illustration one needs to go further than imitating the photo. 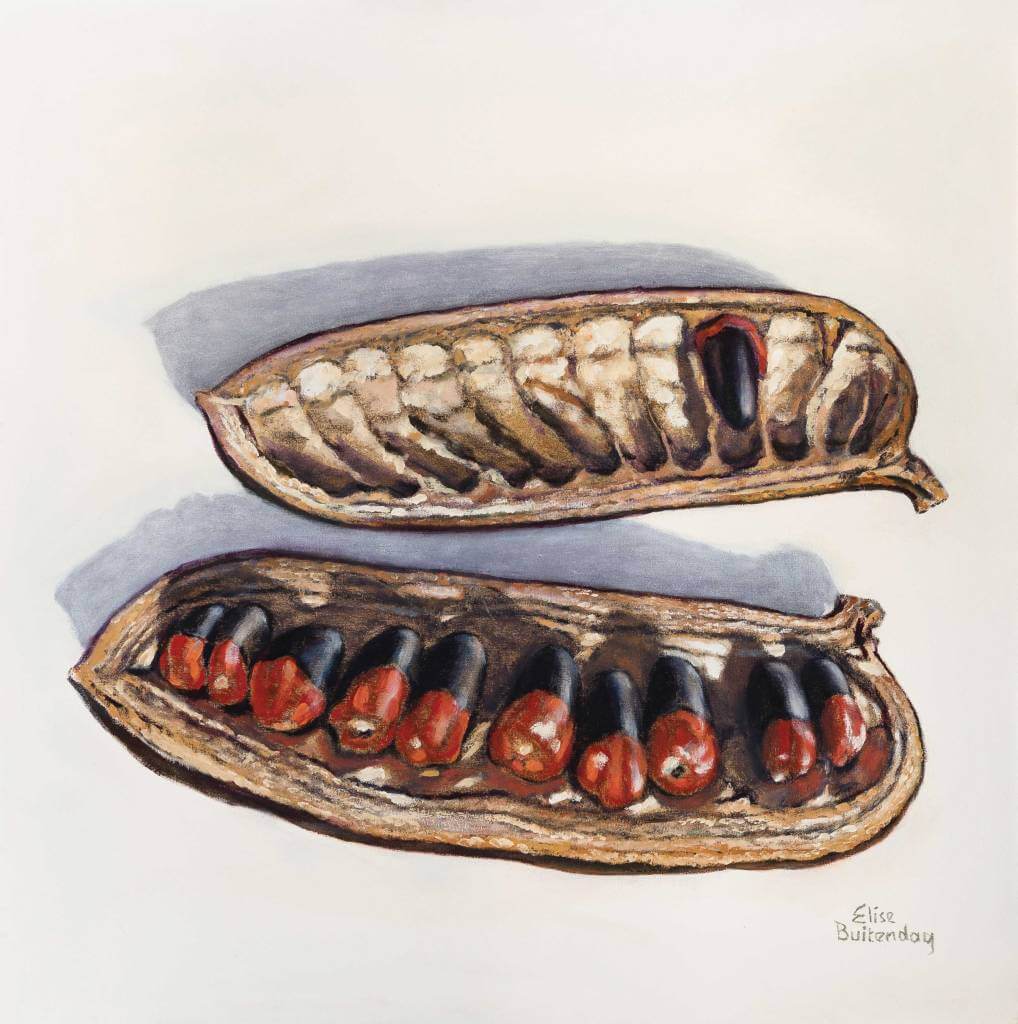 What is the best thing about being an artist?

Elise refers to the quote “Art is one of the most intellectual activities because every step of the process confronts the artist with numerous choices”. Creating art requires focus, observation and concentration, and should never become a mechanical process. Each component of a painting is important and one cannot neglect any part. Elise particularly enjoys the harmony of nature, where each part contributes to a beautiful equilibrium.

Who/what are the main influences of your work?

Elise’s artwork is strongly influenced by her father who was also an artist. South African artists Cythna Letty and Karin Daymond have also had a huge influence on her development as an artist.

What has been the most inspiring moment for you as an artist?

One of Elise’s greatest inspirations are her students. Often as they learn, they tend to hate their own artworks, as they aspire towards perfection. Elise remembers teaching a student who would dance and shout with the joy of creating a beautiful painting, an important lesson in appreciating one’s own work.

Is there anything else you’d like to mention that I haven’t asked?

To close, Elise would like to emphasise the importance of always growing, always living on the growing edge – not the most comfortable position to be in. You only grow into the space you allow for yourself. 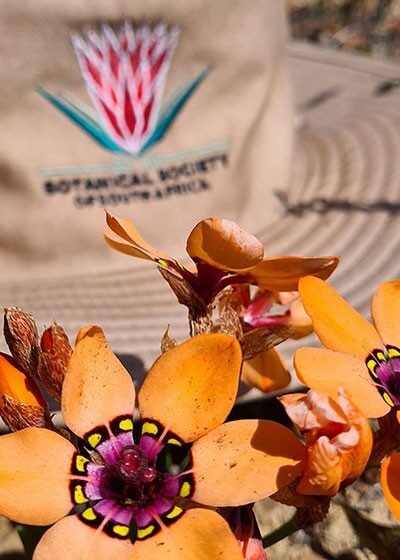 Webinar: Spring has sprung!
Where are the best spots to enjoy the spring floral fest this year? 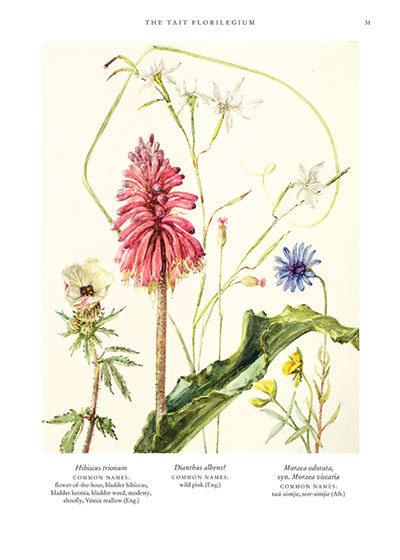 Let’s Meet Lady Tait: Profile of an Artist
Her beautiful botanical artworks were recognised by the Royal Horticultural Society of the UK, where she was awarded the silver medal in 1956 for her exhibit of Cape Wildflower paintings and a bronze medal in 1961 for an exhibit of South African Gladiolus. 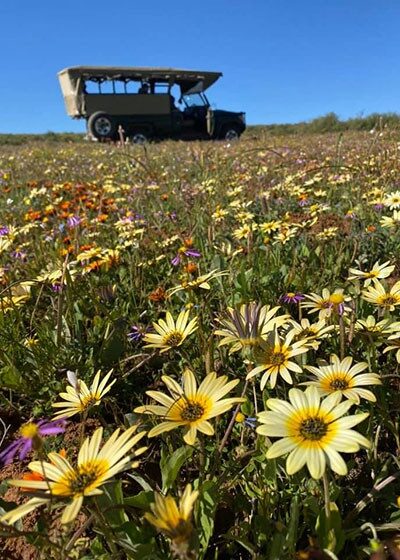 Hantam: A 2022 must-see spring flower destination
The bulb capital of the world – Nieuwoudtville in the Northern Cape – has already started transforming into landscapes of colour ... 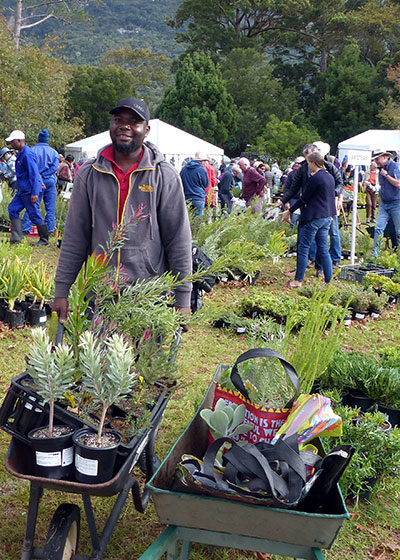 Kirstenbosch Plant Fair: Growing Indigenous and Cultivating Community
In addition to this botanical bonanza, the event also served as an expo for various organisations. Experts from the Custodians of Rare and Endangered Wildflowers (CREW)
1 2 … 14 Next