Above: The Hantam National Botanical Garden comes alive in the “secret season” – autumn, when after good rains, the Brunsvigia bosmaniae starts flowering. Photo by Eugene Marinus

Don’t make the mistake of thinking that the Nieuwoudtville area only comes alive in spring. Well-known Hantam expert, and one of the region’s most famous botanical names, Eugene Marinus, has a tip for visitors. Don’t miss the Hantam National Botanical Garden during autumn – “the secret season, when during certain years, the landscape just explodes in colour, after we’ve had good rains.” 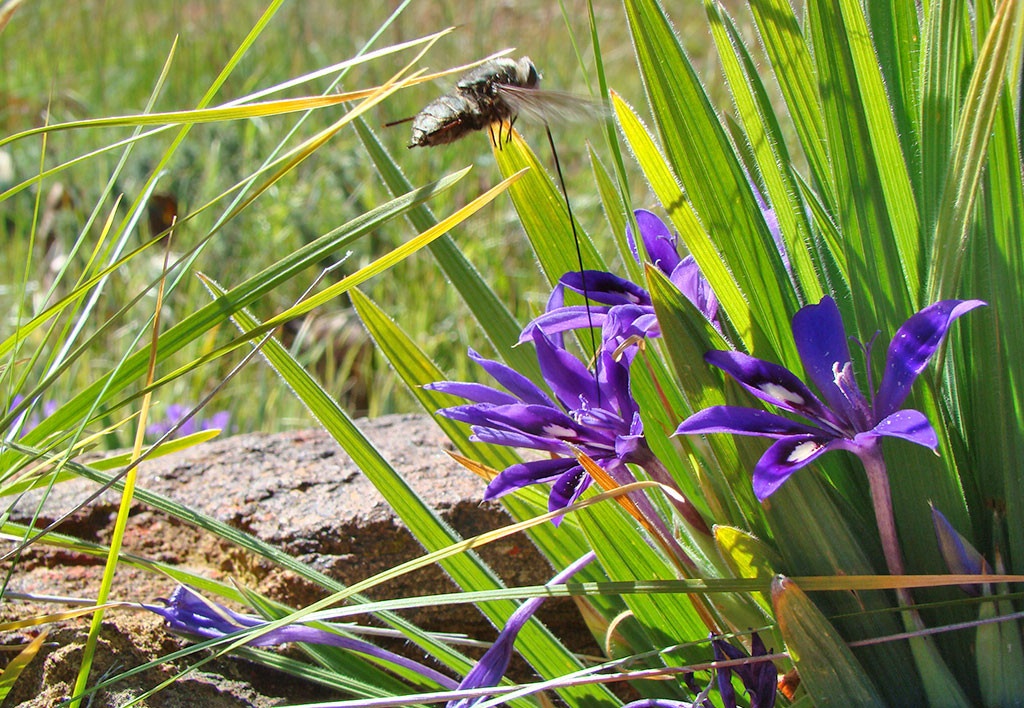 Above: Eugene Marinus is not only a botanical expert. He also has a long-tongued fly named after him – the Prosoeca marinusi. Photo by Eugene Marinus

Few would have better advice to offer than Eugene, who served as the curator of the Hantam National Botanical Garden since it was officially gazetted as South Africa’s ninth NBG in 2008, until he “retired” in 2022. He says,

‘Everyone is focused on spring. But in autumn you see the Brunsvigia and other Amaryllidaceae species.’

He is of course referring specifically to Brunsvigia bosmaniae, which flowers in autumn, and in some years puts on a display of pink colours that takes the breath away at the Hantam garden in the Northern Cape. “You’re in the middle of what I call the greyscale period, the barren summer. And then suddenly they burst out of the barren land and you see a mass display of these pink balls.”

Eugene’s tip: It’s all about the rain

During Eugene’s 14 years at the garden, he closely monitored when the Brunsvigia emerge. They’re not on display every year. “That’s because they need a certain amount of rain late in summer, usually a thunderstorm of around 15mm or more. Then you can count – around 21 days later, they are in full flower. This is not scientifically proven, but is rather from my photographic records during my time at the garden.”

This wonderful plant species has a special significance for him: “My son’s first plant word was Brunsvigia bosmaniae. He was just four years old at the time.” 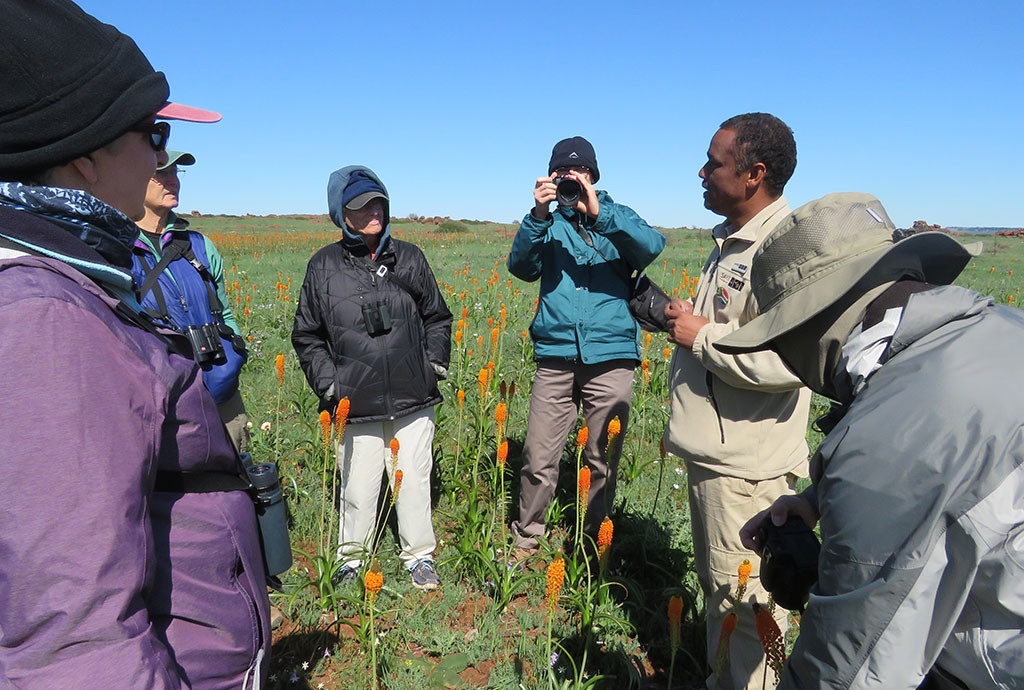 Above: Eugene (second from the right) not only enjoys being in nature, but he loves sharing his knowledge of the Hantam area with visitors and tourists. Photo: Eugene Marinus

Breaking the apartheid barriers for nature

His own career in conservation also started when he was a young boy. An eco-club in Kleinmond in the Overberg, his hometown, launched in 1983, in the midst of the apartheid era. This club was called Kleinmond ECCO, and nine-year old Eugene joined immediately. “It was the brainchild of Peter Slingsby. We weren’t allowed to go anywhere during those years, but he broke all the barriers and exposed us to nature. I learnt my first Latin name when I was nine: Protea cynaroides (King Protea).”

That set him on his nature course – first as a general worker at the Harold Porter National Botanical Garden, then as research assistant at the Kirstenbosch National Botanical Garden. It was during this time that he got to know the Nieuwoudtville area, via a conservation farming project he was involved in. “I fell in love with the place,” he says.

In fact, his involvement in the Hantam National Botanical Garden remains one of his greatest achievements. “Taking the Hantam garden from a sheep farm to a botanical garden was a big achievement. And then being accepted by the local farming community. People won’t know the difficulties of being labelled a greenie. But I got involved with the farming community, and I was accepted.” 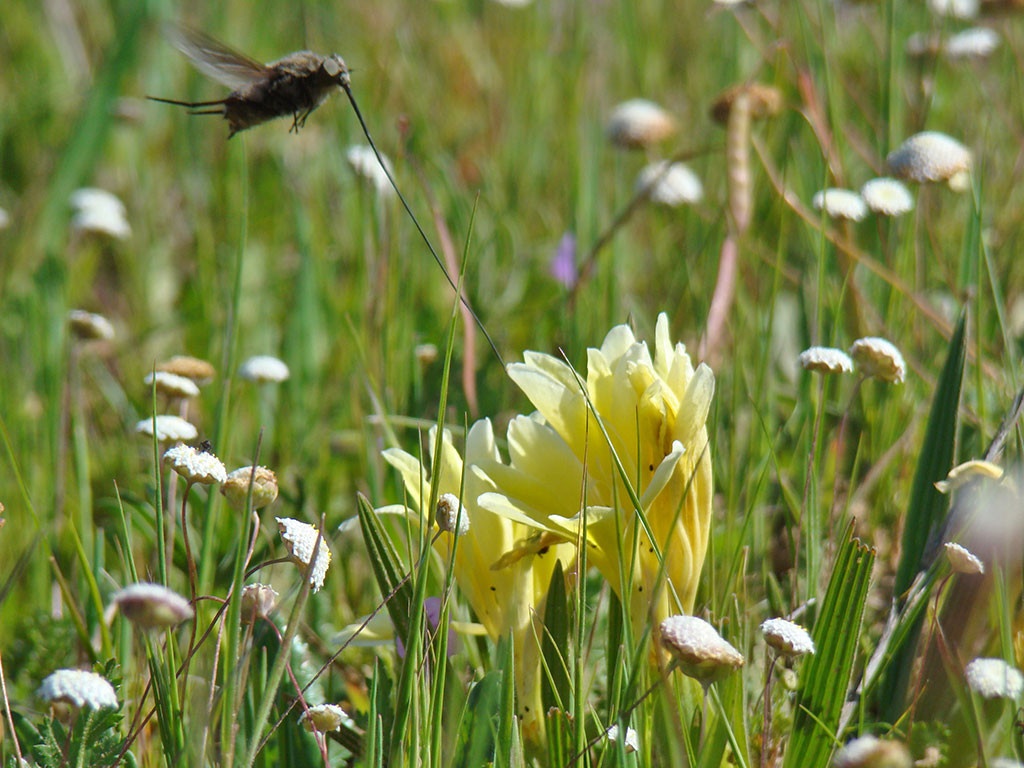 Above: During his research on the Prosoeca marinusi, Eugene came to realise how pollinators interact with plants, and also how many insect species have already gone extinct, before they were even described. Photo: Eugene Marinus

Eugene also has a long-tongued fly named after him. The fly was known to science for about 20 years prior to it being named. But it was his fascination with the fly that led to its naming: the Prosoeca marinusi. “That’s where my interest in pollinator interactions with plants started. My hobby became photographing various pollinators on plants that have specialised flowering plants, such as long tubes.” He adds, “It made me realise that many insect species are going extinct faster than they are being described.” 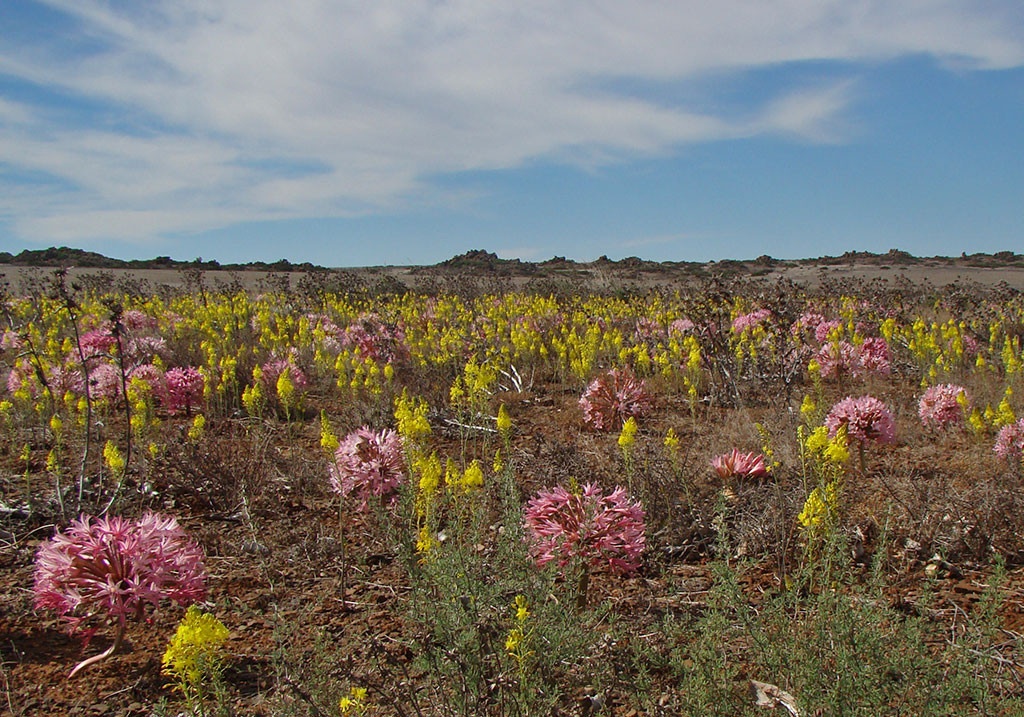 Above: During his years at the Hantam National Botanical Garden, Eugene especially came to love the changing of the seasons and the flowers that accompanied them. Photo: Eugene Marinus

Although Eugene is no longer at Hantam, his connection with nature – and BotSoc – continues. He now lives in Tulbagh – a town his wife René fell in love with during their 10th wedding anniversary trip. He is launching his own conservation services and eco-tourism business, focused on the Namaqualand and Nieuwoudtville area.

And he’s still continuing his passion for plants – he is planning to use his time to undertake CREW (Custodians of Rare and Endangered Wildflowers) work in the Witzenberg district. Here he will be revisiting CREW sites where endangered species were identified in the past and hopefully find new populations. He does this for one reason: “I love indigenous plants because we have such a rich diversity in South Africa. Especially in the Cape.”

World GIS Day: Applications of GIS in Biodiversity Conservation
Highly skilled GIS professionals are in demand across a variety of sectors in South Africa including biodiversity conservation.
1 2 … 13 Next